A key recommendation of the Productivity Commission was for a Best in Show list of super funds that represented great value. The sector hated the idea because it threatened their gravy train. MPs duly fell into line and instead last week passed legislation that, on its own, could worsen the problem of fund underperformance. Harry Chemay investigates.

At the end of 2018, and after nearly three years of intensive investigation, the Productivity Commission released its final reports into the efficiency and competitiveness of Australia’s near $3 trillion superannuation system.

Two of its key recommendations included a ‘Best in Show’ list of funds and opening up the enterprise bargaining agreement default system to more competition.

The Best in Show list would be a game changer. The list would comprise a small number of funds, curated by an expert panel, that represented outstanding value-for-money in all key aspects of superannuation.

The list would offer just enough choice to allow novice members to make an informed decision but not too much choice so as to paralyse decision making.

Interestingly, both sides of politics ignored this recommendation, leaving us to wonder whose interests politicians are really looking after when it comes to dignity in retirement.

The Coalition has instead focused on the Productivity Commission’s recommendation to open up the default system to more competition.

Under previous arrangements employee super could be directed into one of a list of “authorised funds” maintained by the Fair Work Commission. This was criticised for favouring not-for-profit super funds (“industry funds”) and denying employees their preferred alternative (if they had one).

Retail funds have been vigorously lobbying to break the nexus between workplaces and industry funds, and a recently enacted bill allows that.

Your Super, Your Choice Bill

The Treasury Laws Amendment (Your Superannuation, Your Choice) Bill 2019 passed both houses last week, on August 25, and amends the rules in providing super for employees working under enterprise bargaining agreements (EBAs) and workplace determinations. The amended law will allow new employees hired under the award system to pick a super fund of their choice, retrospective to July 1, 2020.

This should act to give retail funds greater access to a potential new source of members.

This proposal was first recommended by the 2014 Financial System Inquiry (FSI), headed by David Murray, former chief executive of CBA and recently departed chair of AMP. Murray noted that all employees “should be able to choose the superannuation fund that receives their Superannuation Guarantee (SG) contributions”.

Murray was concerned that that fees had “not fallen by as much as would be expected given the substantial increase in the scale of the superannuation system”.

In his view, a major reason was a “lack of competition” in the default system.

The FSI then called for a report by the Productivity Commission, which duly conducted a forensic investigation into the super system and reported back in 2018.

Over three stages and nearly three years, the Productivity Commission requested, requisitioned and cajoled from the super industry data that had never seen the light of day.

Undeterred, the Commission relentlessly and methodologically pieced together the most complete snapshot of Australia’s near $3 trillion superannuation system. Much of it was unflattering.

The Productivity Commission’s overall assessment was that super was an “unlucky lottery” for too many Australians, one that might cost them dearly in retirement.

The two most damaging issues were “unintended multiple accounts” and entrenched underperformance.

Legislation has already been passed to move small inactive accounts to the Tax Office, and remove unwanted insurances for younger members, which will help with the first issue.

Underperformance too hot to handle

The second – fund underperformance – appears too hot an ideological potato to handle.

Unfortunately, the legislation that has just passed will do little to mitigate underperformance, and could even worsen the situation.

The Productivity Commission’s analysis revealed that the average worker in a poorly performing fund could lose the equivalent of 13 years of pay, or more than $600,000, over the course of a full working life compared to a top performing fund. The final report described this huge discrepancy as “a systematic performance divide”.

A key predictive variable for performance was whether a fund was not-for-profit (industry) or for-profit (retail).

Retail funds as a group delivered returns of only 5.1% per year between 2005 and 2017, while not-for-profit funds delivered 7.1% in the same period.

When more than 500 investment options were compared, two characteristics stood out. Larger fund options tended to outperform smaller ones. And retail funds significantly dominated the underperforming ones, as the chart below indicates: To be fair, the chart also shows that a small number of retail funds were among the very best performers.

In theory, employees can now select a retail fund that may prove superior to the default (industry) fund that they would have been put into.

In practice, this is unlikely to happen.

The paradox of choice

The Productivity Commission found that consumers benefit from more choice when there is clear information about different products, they have an understanding of the differences, or the cost of obtaining that understanding is not too large.

That may be the case when you’re staring down the supermarket aisle thinking about which variety of chocolate treat to buy.

When faced, however, with some 40,000 different investment options across 145 or so super funds, the rational brain is prone to ‘choice overload’ and instead resorts to various mental shortcuts, mostly to its owner’s disadvantage.

Moreover, it is no accident that there are so many funds from which to choose, with the Productivity Commission report finding that in 2016, 18 super funds offered more than 1,000 investment options, while a further 24 offered between 100 and 1,000 options. All were retail funds.

The Productivity Commission did not envision an open slather approach to choice. As noted earlier, a key recommendation was for a short-list of super funds to take the place of the Fair Work Commission’s authorised funds.

The Best in Show shortlist would work in conjunction with the existing MySuper and choice regime as depicted below: 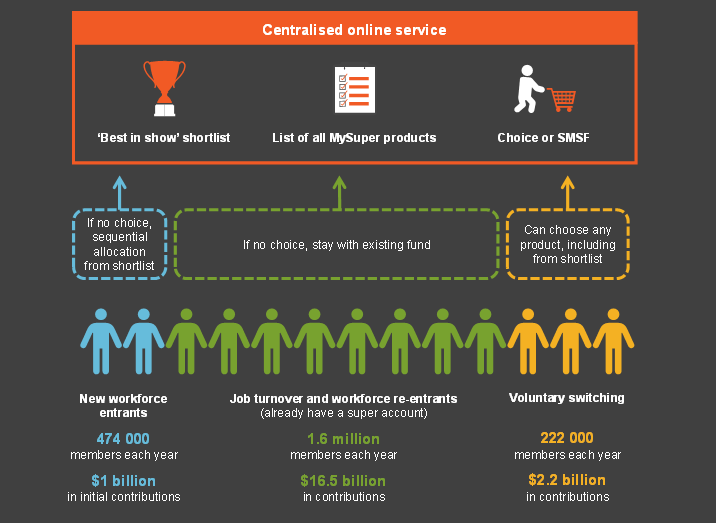 The Best in Show recommendation was meant to work in parallel with the legislated changes. Instead it seems to have been quietly buried, apparently with rare bipartisan support.

That clearly doesn’t align with the interests of a small number of struggling not-for-profit funds or the large tail of laggard retail funds.

So now we have laws that allow for a new EBA-based employee to choose from those 40,000 alternatives, on the assumption that the right purchase decision will be made.