There it was right on cue, at the cusp of the New Year weekend, a government press release about the cost of welfare bludgers trumpeted loudly across the press and the TV news bulletins.

SBS: “Working Australians are forking out roughly $83 per week to fund the nation’s welfare bill”.

Nine News: “The average Australian worker is handing over $83 per week to pay for the nation’s welfare bill”. Seven’s clip was eerily similar.

No matter if they have worked hard all their lives, the intended narrative of the government’s media “drop” is that aged pensioners and the disabled are welfare bludgers.

“Average taxpayers are handing over $35 every week to prop up aged pensioners,” said the Daily Telegraph in high indignation. “Prop up”? Do these pensioners really deserve to be propped up or shall we just put them out on the streets?

This “prop up” language from an organisation which was ranked as the number one “Tax Risk” in Australia by the Tax Office, an organisation whose pay TV outfit Foxtel pocketed a cool $30 million hand-out from government last year and has paid zero tax for three years on $8.4 billion in income.

When they released the tax transparency data before Christmas, showing many of the biggest companies in the world pay little or no tax here, the government snuck the release out half an hour before the denouement in the same sex marriage vote. The media dutifully missed the story.

This year, the Tax Office data showed 354 of Australia’s biggest companies have now paid zero tax in three consecutive years on a combined total income of $911 billion. It should be said that some of these have a bona fide reason for not paying tax, an industry downturn or large tax losses. Most don’t.

As it is the season, we can only hope these media organisations make this New Year’s resolution, “We will give up drinking, smoking and republishing tendentious government press releases”.

Breaking down the numbers in this assault on the most vulnerable, we are “propping up” aged pensioners by $35 a week, family benefits schemes $20 a week, the disabled $17 a week and the unemployed $6 a week.

The big number however in this roll-call of welfare bludgers is healthcare where, as Nine puts it, “We also hand over about $42 a week”. You could be forgiven for thinking the folks in these media organisations don’t use the healthcare system, they just fund it.

The average Australian worker is handing over $83 per week to pay for the nation’s welfare bill. #9News pic.twitter.com/sE0o35u5l3

Unless something radical is done about the delivery of healthcare, this $42 a week is going to shoot up. Australia will run out of money.

When former Treasurer Joe Hockey unfurled the Intergenerational Report, the most meaningful bit was buried on page 101 in the Appendices.

Here we find that every item slated for an increase in government spending – besides an extra $1,100 per head on defence spending – is healthcare related.

How can Australia afford a 72 per cent increase in health costs in the face of a falling workforce participation rate (more retirees, less workers)? The report shows we go from one million people needing some form of aged care now to 3.5 million people in 2050. 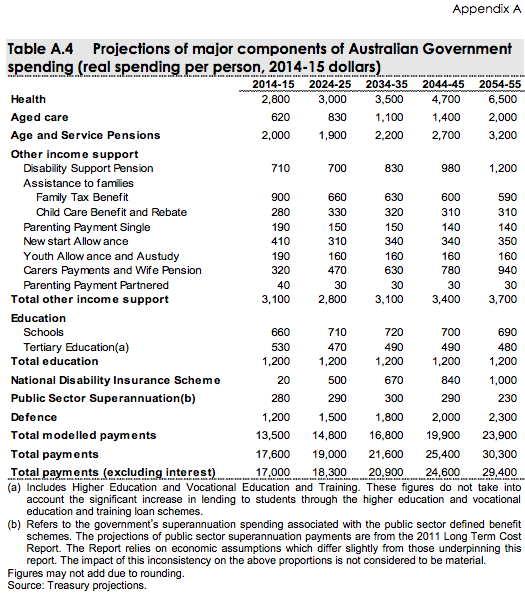 All sorts of things need to be done to rein in healthcare costs but the unsung story is about those who benefit most from the increase in government spending, foreign multinational drug companies who benefit from Australia’s $10 billion Pharmaceutical Benefits Scheme PBS). That $10 billion figure could be $12 billion by now. Who knows?

Department of Health data about the cost of the PBS is hard to find. If you can find it it is routinely old – just like the political donations disclosures. And it is rarely reported about, which is just the way government and Big Pharma like it.

According to the 2014–15 Department of Health annual report, the PBS cost the Australian Government $9.1 billion in 2014–15. It will likely have shot through $10 billion over the past two years, and this week there were media reports the “government will spend just over $2 billion on subsidising new medicines, and reducing the cost of some already covered on the Pharmaceutical Benefits Scheme”.

This thing is going through the roof.

While the drug companies are the major financial beneficiaries of the soaring PBS they are also big tax avoiders; mostly via transfer pricing (manipulating their product prices in deals with foreign related companies to siphon profits offshore).

Some are better than others, Johnson & Johnson has been a comparably good taxpayer while Pfizer and Sanofi-Aventis have paid nothing in the past two years on billions in income. The typical profile though is for the drug company to pay just enough income tax so as to not stick out, schmooze the medical fraternity and bureaucrats, keep a low profile in its dealings with government and make political donations to both major parties.

Moral of the story? You pensioners and disabled had better start making political donations, then government will prop you up with nary a word of complaint.