New York pharma giant Pfizer has engaged in a series of paper transactions to create artificial share capital and a $936 million loss in Australia. It is, for all intents and purposes, a billion dollar exercise in tax avoidance. Michael West reports.

PFIZER AND its auditors KPMG, the “Big Four” global accounting firm, refused to comment on the transactions or to defend them when presented with questions by michaelwest.com.au. Pfizer was contacted on numerous occasions and refused. Both parties declined to return emails and phone calls.

These transactions, housed within a byzantine corporate structure, are typical of the multinational tax avoider. We will outline, in brief, the series of transactions with Pfizer associates in The Netherlands which led to this “Bottom of the Canal Tax Scheme” then provide the background narrative to the company’s activities.

Bottom of the Canal scheme 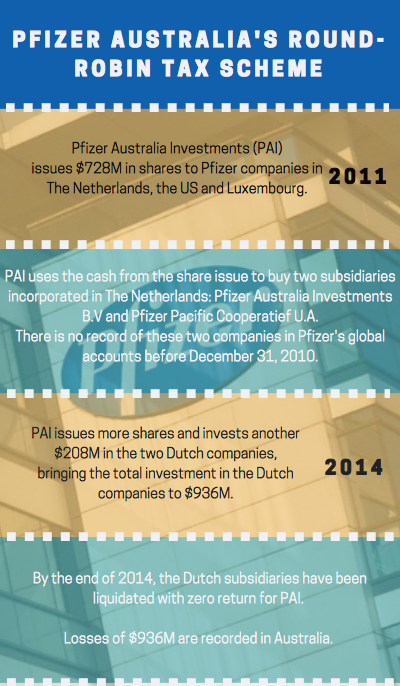 This ring-a-ring-a-rosy has all the hallmarks of a transaction designed to create almost a billion dollars in losses which can be used for tax purposes in Australia. The Australian company has “invested” almost a billion dollars into two companies which were suddenly liquidated — with no value left for shareholders. Nothing is heard of them since.

It brings to mind the infamous Bottom of the Harbour tax schemes of the 1980s where the financial engineers – facilitated by the top end of the accounting community – made investments in companies, stripped those companies of their assets and left nothing for the taxman.

In Pfizer’s case, almost $1 billion of cash was “invested” in two companies in the Netherlands which went belly up within three years and left the Australian entity – indeed Australian taxpayers – carrying the can for its losses as the freshly created $1 billion in share capital is now sitting pretty for tax-effective distribution to Pfizer overseas.

When it comes to manufacturing share capital in Australia for tax purposes, Pfizer has form.

Back in 2011, another Pfizer entity, Pfizer Australia Holdings, created new share capital of $733 million after it bought two subsidiaries from Pfizer Inc. The two subsidiaries were acquired for hundreds of millions of dollars.

Pfizer issued shares, rather than paid cash, to buy these assets from themselves. So, new shares were created at a value of $733 million. This enormous price relied on a fancy asset valuation for the intangible assets held by these subsidiaries, notably, “Product Development Rights” of $461 million. These were the main assets acquired.

By 2014, $408 million of this new share capital had been returned in cash, repatriated to Pfizer companies overseas. And the Product Development Rights had already evaporated (amortised) by $161 million.

Share capital created, assets written off, again. This is the Pfizer pattern. Audited by KPMG, Pfizer’s share capital is created and its assets vanish.

On Dec 1, 2014, another Pfizer entity in Australia, Pfizer PFE Pty Ltd, acquired the Innovative Products Oncology and Consumer business from Pfizer Australia Holdings for nil consideration. This included the mysterious Product Development Rights. Nil consideration. These are the Rights had been valued three years earlier at $461 million.

Pfizer Australia Holdings describes the transfer of this Innovative Products business as a “distribution”, a “transaction with owners in their capacity as owners”, according to its statutory financial statements.

In reality it is no such thing. Pfizer PFE is not an owner of Pfizer Australia Holdings. It holds no shares. It is merely a related party with a common ultimate parent in the US, Pfizer Inc.

Behind this narrative of a “distribution to owners”, is tax. When you make profits of hundreds of millions of dollars, avoiding the 30 per cent corporate income tax rate is big business.

Pfizer then and now

In 2008, it surreptitiously switched from General Purpose accounting to preparing Special Purpose financial statements with far less disclosure, especially about income tax. KPMG’s 2008 audit report gave this special purpose audit report a clean bill of health even though required disclosures for changes in accounting policies were not made.

From 2009 to 2012, Pfizer Australia Holdings paid franked dividends to shareholders of $576 million; that is more than half a billion dollars going overseas. This is the good stuff, though, the above-board stuff, dividends paid out of profits already taxed in Australia.

After 2012, Pfizer ran out of Australian profits to distribute.

They had hit the “patents cliff”. Their blockbuster drugs Lipitor and Viagra were coming off patent, being challenged by generic competitors. Pfizer’s sales peaked at $2.2 billion in 2012. This used to be the biggest pharmaceutical company in the country.

Yet Pfizer had hit another cliff. They were running out of Australian profits to distribute as dividends. They needed another way to rake the money offshore. And it came in the guise of return of share capital; better than dividends as there are far lighter tax obligations.

In 2014, a return of capital of $408 million was made offshore. And now, in 2016, Pfizer has made sure, through its sham transactions with associates in The Netherlands, that there is another billion dollars (of artificially created share capital) ready to go offshore when the US overlords make the call.

Two things stand out, two giveaways for the sham “magic pudding” of Pfizer share capital creation and its bottom of the canals tax scheme.

One, PAI’s audited financial statements claim that two Netherlands subsidiaries were incorporated in Australia. We can find no record of this.

Two, in 2014, PAI invested $208 million in the two Netherlands subsidiaries which were liquidated in the same year for no return. That’s more than 1970’s tax-driven racy corporate behaviour. 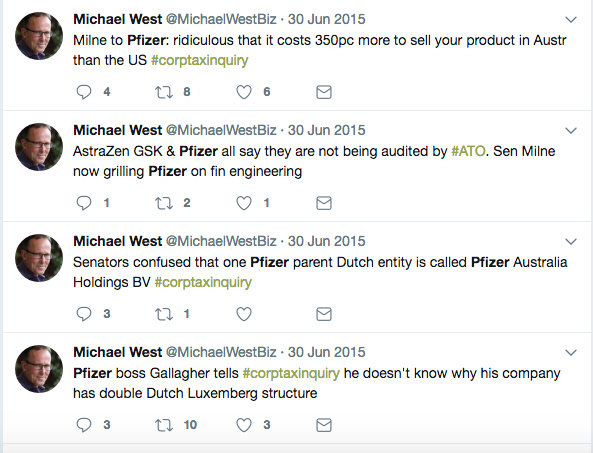 This column, co-published by The Conversation with michaelwest.com.au, is part of the Democracy Futures series, a joint global initiative between The Conversation and the Sydney Democracy Network. The project aims to stimulate fresh thinking about the many challenges facing democracies in the 21st century.

Michael West has been paid by GetUp! and the Tax Justice Network to conduct an analysis of the tax affairs of 20 multinational companies.