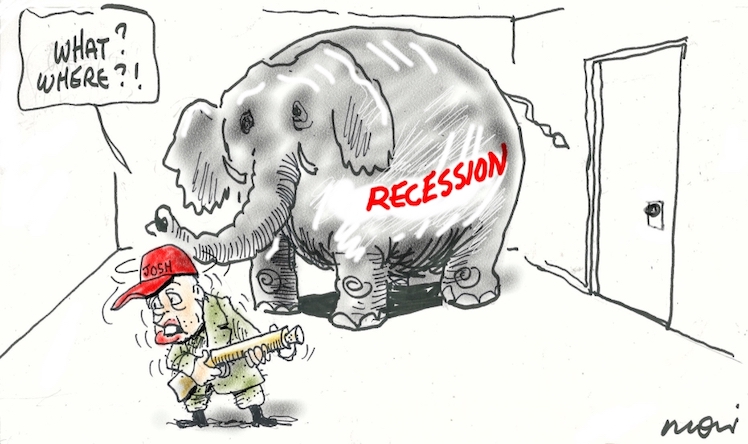 The supreme irony of the latest, listless GDP data is that private demand has been propped up by “brisk” government spending. There are serious questions over the Government’s competence to run the economy, reports Alan Austin.

Australia continues to lag the rest of the world.

Many of the latest published outcomes are at historical lows and push Australia even further down the global rankings. The latest GDP figures released this week corroborate that Australia is in a serious rut, only saved by demand for minerals dug out of the ground and exported.

The mainstream media once again preferred to focus on tangential bits of good news, chiefly by running the government’s narrative:

The Age focussed on the surplus

The increase in gross domestic product (GDP) for the June quarter, announced by the Australian Bureau of Statistics (ABS) yesterday, was a miserable 0.48%. This brings annual GDP growth to just 1.44% for the year to the end of June. (This analysis uses seasonally adjusted figures. The trend data, preferred by some, show even worse outcomes.)

This is the lowest annual growth for a financial year since 2002-03, during the early 2000s global recession. Prior to that, the year with lower growth than now was back in 1991 during Paul Keating’s “recession we had to have”.

Australia’s ranking among the 36 rich, developed member countries of the Organisation for Economic Cooperation and Development (OECD) has crashed to 23rd, as shown in the chart, below. This is the lowest ranking Australia has had since records began. Historically, Australia has always been in the top twenty. Through the global financial crisis (GFC) from 2008 to 2013, ranking was mostly top five. Australia reached top spot ten years ago, in 2009, as shown below. The ABS measures total construction across the nation quarterly. This includes homes, farms, factories and other business premises built by the private sector and infrastructure constructed by state and federal governments. During periods of global stability, this will increase annually in well-managed economies, with occasional fits and starts.

Australia’s last financial year saw a disastrous decline in total construction of 9.41%, the worst reversal since the 2001 global recession. The 2018-19 setback is the fifth decline in the six years the Coalition has been in office. That is unprecedented. In fact, since records began in the mid 1980s, there have only been nine negative years. The current Government has presided over five of them.

The ABS measures productivity by calculating GDP generated per hour worked for each quarter. Through most of Australia’s history, this has steadily increased, as happens in most successful economies. As Australia emerged from the global financial crisis, productivity increased for 16 consecutive quarters from 2011 until 2014. Impressive.

Since then it has shifted up and down erratically, but appears to have jammed at around 100 index points since the third quarter of 2016. Until this rises again there is little hope for the prosperity of Australian workers to improve. There is no sign of this under current economic settings.

Total retail turnover for the last financial year was $325.4, an increase of only $9.6 billion or 3.04% over the previous year. Given population increased 1.77% and inflation was 1.6%, that was a decline in real dollars relative to population.

The result for 2018-19 was only fractionally above the previous year’s abysmal 2.56%, the worst outcome on record. The year before that was just 3.13$. So for three consecutive years, retail sales growth has been below 3.2% and thus below the rises in population and prices. That’s the only time this has occurred in 36 years.

The average growth for the 30 years prior to this is 6.10 per cent.

A neat indicator of prosperity is the number of new dwellings built each year. These include old houses replaced with new ones, housing estates for expanding populations and new holiday houses for families able to afford them.

The ABS records the number of dwelling units approved for construction monthly.

Trading economics shows rises and falls in the value of housing for 35 developed countries. The latest data for 2019 shows only seven of these 35 have lost housing value. They are Chile, Italy, Finland, Iceland, the United Kingdom, Sweden — and Australia.

A story of mismanagement

There is no excuse for Australia’s economy to have collapsed so badly on these indicators, all of which reflect the wellbeing of the citizens.

In addition to these six areas of failure for which data arrived this week, remember the other 11 variables analysed here in July:

All of these have steadily improved in most countries through the recent post-GFC global boom. They have deteriorated in Australia.

Australia should still be leading the world on most of these measures, as was the case between 2009 and 2013. Exports are at all-time highs. The trade balance is in record surplus. The current account has returned to surplus — for the first time since Gough Whitlam was prime minister. Corporate profits are also booming in Australia, as elsewhere around the world. The percentage increases in profits for the last three years, as reported by the ABS, were 22.2%, 10.0% and 10.9%. Clearly, the big corporations are dining out while the majority of Australians are finding their income, wealth and quality of life gradually declining. The Coalition’s management of the economy is allowing foreign predators to extract Australia’s wealth with little or no return to the people of Australia, and to permit local corporations to escape the tax burden the majority of workers are unable to avoid.

These policies are serving neither the economy nor the citizens.