Budget repair well under way? Not so fast Josh Frydenberg 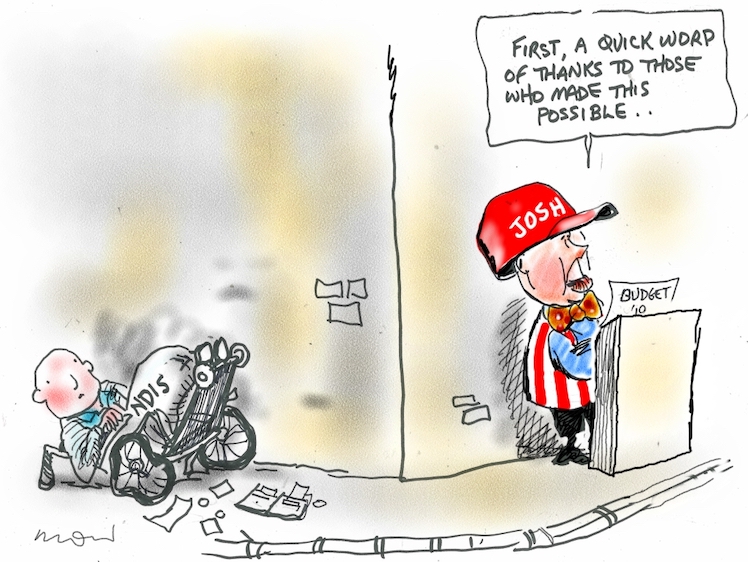 The Federal Government is desperate to depict the 2018-19 budget finalised on Thursday as evidence of a sound economy and budget repair well underway. It proves the opposite. Alan Austin reports.

The 2018-19 budget remains in deficit. A slender one, but still a deficit. This is not what should have been delivered in 2019.

At the National Press Club in May 2012, then shadow treasurer, Joe Hockey, said,

They could have done that with the right policies. Most well-managed countries moved swiftly towards surplus after 2013, when the last developed economies moved out of the recessions copped during the global financial crisis (GFC).

Germany returned to surplus in 2014, joining Norway, Hong Kong, Luxembourg and Belarus which were already there. New Zealand, Switzerland and Sweden returned to the black in 2015. The Netherlands, Iceland, Malta, Bulgaria, Lithuania, the Czech Republic and Greece did so in 2016. Denmark, Singapore, Croatia, Slovenia and Serbia joined them in 2017. Austria, Russia and Qatar produced surpluses in 2018.

Yet few of these economies have basked in the buoyant commodity prices, strong demand for exports and record trade surplus Australia has enjoyed.

“Had Labor’s policies continued after 2013,

Had Labor’s policies continued after 2013, Australia would have been in surplus in 2016-17. That’s according to former heads of Treasury, Martin Parkinson, and the Finance Department, David Tune, in their 2013 PEFO.

During a year of record exports and corporate profits this blow-out is truly bizarre. In 2016-17, the Turnbull Government added just $18.9 billion, which was considered excessive at the time. Labor added just $6.2 billion in 2012-13. That also was greeted with widespread condemnation.

The hike in net debt last financial year increased net debt as a percentage of GDP to 19.2%, the highest since records began in 1970.

Sounds pretty good. And already, finance minister Mathias Cormann has claimed victory. He asserted in his speech to the Sydney Institute last month that

Not so fast. Movements in Australian Government securities (AGS) since June 30 show gross debt is still rapidly expanding. It hit $556.4 billion last Friday. That’s a blow-out of $14.4 billion in just eleven weeks. Were that rate to continue, gross debt at the end of the current financial year will have expanded by $68 billion. That is not ridiculous. Abbott and Hockey added $62 billion 2013-14. Turnbull and Morrison added $80.6 billion in 2016-17.

So if both debt and GDP (current prices, seasonally adjusted, ABS file 5206) increase at the current rate, then gross debt to GDP at the end of this year would be back up to 29.8%, the highest ever. A suspicious mind might surmise that the timing of June and July securities sales could have been adjusted to record a conveniently low level at June 30. So let’s take a chill pill and wait and see.

Smoke and Mirrors: how the ABS tarted up the numbers for Josh Frydenberg

Interest on the gross debt came to $18.95 billion for the year, the highest on record by a street. That was more than two billion dollars higher than last year and more than seven billion higher than in Labor’s last year.

That is $51.9 million forked out every day. Three quarters of this goes to non-resident corporations and foreign governments, mostly in Asia, Europe and North America. This is one of the most destructive elements of the Coalition’s current economic mismanagement.

Net worth all time low

Net worth is the measure of all federal government assets minus liabilities. Assets include cash, investments, land, buildings, equipment, infrastructure and heritage and cultural assets. Liabilities include government borrowings, debts to suppliers, superannuation and other employee debts.

So it’s a neat indicator of how well the government is managing the economy overall.

Australia’s net worth fell during the GFC, as happened virtually everywhere. It recovered satisfactorily in Labor’s last year, 2012-13, elevating from negative $252.0 billion to negative $207.8 billion. It was set to move back into positive numbers in ensuing years with the policies Labor had in place.

The two failed Hockey budgets then saw net worth collapse by a staggering $100.6 billion — down from negative $207.8 billion to an appalling negative $308.4 billion at June 2015, the lowest ever to that point. With all developed countries out of recession and the global recovery accelerating, there was no excuse for that loss.

Under Malcolm Turnbull’s leadership with Scott Morrison as treasurer, net worth continued to plummet until it reached a zenith in September 2016 of negative $443.5 billion. It has now tumbled again to a new low of negative $543.5 billion.

Reasons the last six budgets have all failed to achieve intended outcomes include poor spending decisions, weak industry and employment policies leading to jammed productivity, a refusal to invest in infrastructure and the complete failure to retain in Australia a fair share of the vast wealth shipped out by the foreign exporters of minerals and other commodities.

Company tax collections last financial year again fell well behind where they should have been. If collections in the year just ended were at the same rate as in 2012-13, an extra $8.9 billion would have been collected. That would have yielded a surplus of $8.2 billion. In fact, had Labor’s rate of tax collections continued, the budget would have been in surplus last year or the year before, even with all the wasteful spending and other inept decisions.

Given global conditions and local corporate profits, these outcomes confirm Australia is now managed by the least competent administration in Australia’s modern history and one of the two or three worst in the developed world today.