Those great economic and jobs numbers Trump brags about turn out to be just run-of-the-mill. Carter, Reagan Bush I and II plus Clinton all beat Trump. David Cay Johnston, DCReport Editor-in-Chief reports.

DONALD TRUMP keeps boasting about what a great economy he should get credited for creating. But his administration’s own reports don’t support his claims, which also don’t come close to what he promised voters.

His results so far have been, well, just average.

As if it were a stellar achievement, Trump boasted last week, the economy grew at an annual rate of 3.2 per cent in the first three months of this year. Big deal. That’s precisely the average since 1947.

Candidate Trump boasted many times that he would boost economic growth. In October 2015, he said: “I actually think we can go higher than 4 percent. I think you can go to 5 percent or 6 percent.”

“With solid backing from Republicans in Congress, Trump is borrowing extra trillions of dollars in our name. That’s a classic type of economic stimulus.”

That figure was achieved by a threat that briefly juiced the numbers. Trump declared he would impose all sorts of trade tariffs. Smart importers and exporters took advantage of the delay between the threat and the effective to bulk up on deals early. That briefly pumped up economic growth by moving up deals scheduled for later in the year. The proof? In the next three months, economic growth fell by almost half to just a 2.2 per cent rate.

Carter’s best, by the way, was 16.4 per cent growth, four times Trump’s best so far.

The tariffs gambit was not the only stimulus Trump used to pump up his short-term numbers and trick voters not steeped in economic data, fiscal policy and trade reports.

With solid backing from Republicans in Congress, Trump is borrowing extra trillions of dollars in our name. That’s a classic type of economic stimulus.

Republicans traditionally denounced borrow-and-spend as a tax on our children and grandchildren. A tax cut, like Trump’s, that does not pay for itself with equal or increased revenue, is just a tax increase deferred into the future – with interest.

Tax revenues this year are down about 10 per cent.

The Trump/radical GOP tax cut that took effect last year mostly benefits the rich and corporations. That means the cost of the borrowing is an obligation we all must bear, but the benefits flow mostly to those who need help the least.

The laugh’s on us: How Trump’s radical Republican tax cut broke the economy

Trump’s last budget is projected to run a deficit almost 1.5 times the size of Obama’s last budget deficit according to the Trump administration’s own data, known as Historical Table 1.3.

Trump’s average annual budget deficit over four years will be the worst of any president from Carter through to George W. Bush.

The average Trump shortfall will be 4.6 per cent of the economy.

George W. Bush came in at 3.3 per cent. Clinton’s annual deficit was a mere 0.1 per cent because he ran surpluses in his second term.

The cost to you of Trump’s borrow-and-spend approach? Instead of retiring the federal debt in eight years, as Trump told voters he could easily do because he was “the king of debt,” the federal debt is growing at the rate of $30 per day for a family of four. That’s almost $11,000 per year for that family.

Trump’s borrow-and-spend, however, has failed to stimulate faster jobs creation.

Under Trump, job growth is slower than under Obama. Trump’s average is 198,000 more jobs per month. That’s good, but far from great.

Obama, during his last six years and a month, averaged 204,000 more jobs each month.

Why not rate Obama based on his full eight years? Because when he took office jobs were disappearing at the rate of 750,000 a month, clearly not his fault.

America’s population grew by 19 million people in the eight years between when Obama and Trump took office. Taking the larger population into account makes Trump’s job growth figures even less impressive since a larger population requires more jobs just to stay even.

Trump promised, if elected, the nation would add 25 million new jobs in 10 years. He’s on track to fall more than a million jobs short of that goal.

That goal was nothing to brag about, either. Before Trump started making campaign promises the projections of future job growth were about what Trump sold as a miracle waiting for him to make it happen.

The reality is that Trump’s economic performance, measured by his own administration, is merely average.

Given the strong and growing economy he inherited, average is nothing to boast about. And since attaining average has included tariffs that raise the price of some imported goods together with massive increases in federal borrowing the long-term consequences are going to be anything but great and probably not even average.

David was a guest of the Sydney Democracy Network in Australia in 2017. 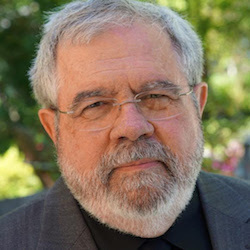