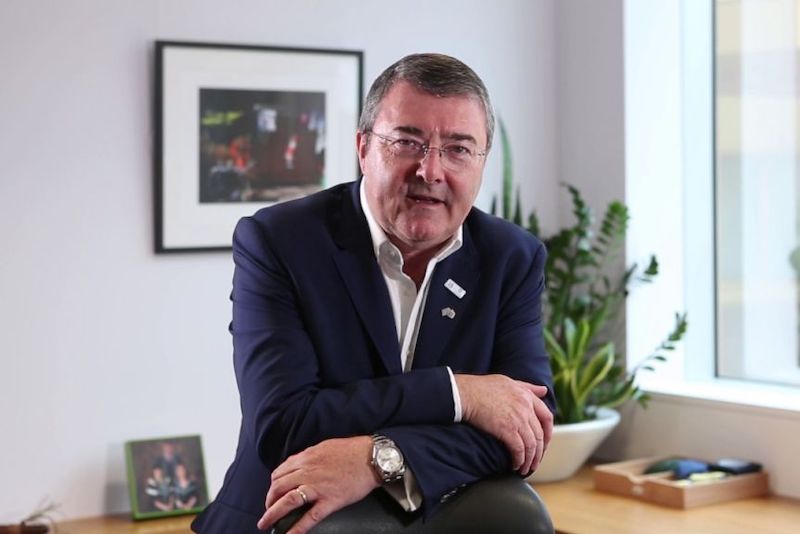 As part of her series of investigations into the close links between the military industry and politics, Michelle Fahy reports on former weapons chief executive for BAE, Jim McDowell, who is now at the centre of government in the Defence State, South Australia.

Jim McDowell was employed in the weapons industry for 37 years. Born in Belfast, he studied law then spent 18 years with Northern Ireland firm Bombardier Shorts. After that, he joined British Aerospace (now BAE Systems) in Singapore and worked his way up through various positions in Asia.

In 2001, McDowell was appointed CEO of BAE Systems Australia. During a decade in that role he oversaw BAE’s 2008 acquisition of Tenix Defence, a deal that doubled the size of the company and resulted in BAE becoming Australia’s largest weapons-maker at the time. It remains one of the largest today, mostly for building Australia’s warships, among other projects.

In September 2011, Jim McDowell left Adelaide for Riyadh, where he ran BAE’s Saudi Arabian operation for a little over two years. Saudi Arabia is crucial to BAE’s business, its third largest market after the US and the UK (Australia is fourth). The company has been supplying combat aircraft to the Saudis since the 1960s. Several of its arms deals have been dogged by controversy (and continue to be due to the Saudi role in the humanitarian catastrophe in Yemen), and some by corruption. In the UK, a Serious Fraud Office investigation into BAE’s relationship with the Saudis was notoriously shut down in December 2006 following intense pressure from the Saudi government and the UK’s then prime minister Tony Blair, citing national security reasons. The capitulation of the Serious Fraud Office was later deemed “unlawful, an “abject surrender” and a “threat to the reputation of British justice” by the British High Court.

By the time McDowell arrived, all that was in the past and it was back to business. In a media release describing a visit of the BAE Board to Saudi Arabia in March 2012, McDowell said, “Saudi Arabia is a key market for the company. We want to be considered as an industrial and a strategic partner for the Kingdom… The meeting was a wonderful way to strengthen relations.” Several multi-billion pound arms deals were concluded during the period McDowell was BAE’s chief executive in Saudi Arabia.

Back to Australia with ANSTO

In December 2013, McDowell resigned from BAE and returned to Australia. He was immediately appointed to the board of the Australian Nuclear Science and Technology Organisation, as deputy chair. Then Industry Minister Ian Macfarlane said, “Mr McDowell’s business background coupled with his knowledge of international marketing and joint ventures will support the development of emerging business opportunities…” ANSTO’s chair, Dr Paul Greenfield, said, “This is a dynamic and exciting time for ANSTO and this is reflected in the overall contribution nuclear science and technology is now making across a range of key areas.”

Earlier that year (in February 2013), ANSTO had signed a formal research cooperation agreement with the Defence Science and Technology (DST) Organisation. This was a period when DST, under Chief Defence Scientist Alex Zelinsky, signed a number of collaborative agreements with military industrial companies, including BAE in October 2013 and, as we have covered previously, Lockheed Martin in March 2014, among others.

At the completion of Dr Greenfield’s term, in August 2014, McDowell was appointed chair of the ANSTO board, a position he held for the next four years.

McDowell’s timely departure from the military industry created an influx of new opportunities for him from a government with a policy of recognising industry as a “fundamental input to capability”. Following his rapid appointment to the ANSTO board, over the next four years, McDowell was awarded lucrative contracts across six major areas by Defence (see table), which together totalled almost $1.5 million in consultancy fees.

To supplement the government’s largesse, in the same four-year period, McDowell accepted appointments as Chancellor of the University of South Australia and to the Council of the Australian Strategic Policy Institute. He also joined the boards of eight public companies, most of which operate in the military industrial sector. In addition to those in the chart, McDowell was made chair of another two private companies, duMonde Group Pty Ltd and Total Construction Pty Ltd (dates of those appointments are not publicly available). In 2017, it appears McDowell was engaged simultaneously in at least 12 different roles.

From 2018, CEO Department of Premier and Cabinet, SA

In mid-2018, South Australian Premier Steve Marshall announced that McDowell had accepted his offer to become the state’s most senior public servant: the new chief executive of the Department of Premier and Cabinet. McDowell responded to criticisms of his $550,000 annual salary by noting he was now earning less, “by a factor”, than he did previously. Evidently so.

Nevertheless, as the most senior public servant in “The Defence State”, hired, among other things, to oversee a booming $90 billion industry in warship-building, and with a network of public and private connections at the highest levels, it is unlikely that McDowell’s sphere of influence will have diminished alongside his income. 15.6.20 Premier Steve Marshall’s office forwarded our questions to the SA Commissioner for Public Sector Employment, Ms Erma Ranieri. In response to our third question regarding the Department’s employment of executives with potential conflicts of interest and the procedures it follows to identify and manage such conflicts, Ms Ranieri said, “It is important we uphold the Code of Ethics, as it is the foundation of our public sector’s conduct, culture and professional integrity. There are obligations for senior officials to disclose any interests under the Public Sector (Honesty and Accountability) Act 1995. My office co-ordinates an annual update on behalf of the government.”