The Australian Strategic Policy Institute is not only funded by the Defence Department but also receives sponsorship money from foreign governments, weapons manufacturers, and US corporations that have used or are using prison workers paid as little as 23 cents an hour. Marcus Reubenstein reports.

At least 10 financial backers of ASPI have either directly or indirectly been involved in prisons and the use of prison labour and/or implicated in human trafficking.

At a cost of about $US5 million per missile, more than 10,000 Patriots have been produced, with  Raytheon reporting that missiles have been supplied to 16 US allies.

Prisoners making missile parts are paid as little as 23 cents per hour. UNICOR, the operator of the factories in federal prisons, discloses on its website that prison authorities can withhold some, or even all, of those wages from prisoners to pay fines and other debts.

Since it was revealed a decade ago that these defence contractors were using prison labor, Raytheon shares have risen by 430% and Lockheed Martin’s by 500%. Over that time, their prison workers have not received a pay rise.

Independent news website Wired quotes a former civilian employee of prison labor operator UNICOR as saying, “We make wiring harnesses for the military, the [Lockheed Martin-assembled] Patriot missile being one of them.”

UNICOR controls prison labor across 110 factories housed in at least 65 US federal prisons.

Boeing, which donated to ASPI for a decade between 2008 and 2018, jointly manufactures the F-15 jet fighter, which uses components made by forced prison labour.

Lockheed Martin is one of ASPI’s most loyal supporters, having provided cash sponsorship continuously for the past 16 years.

Though ASPI has never disclosed the dollar amounts paid by individual sponsors it was revealed through Senate Estimates that Lockheed Martin paid the think-tank $135,909 in 2018-19.

In 2019 Lockheed Martin began negotiations which saw the Australian government buy $800 million of missiles from the US weapons giant.

A 23 cents per hour workforce

In UNICOR’s factories, inmates manufacture a range of products for both civilian and military applications, with 16 of its prison factories specialising in manufacturing electronics.

Prison workers supply body armour and, according to one report, all US military combat helmets. UNICOR also reportedly supplied the US with three-quarters of all uniforms used during the Iraq War.

Prisoners without a high school diploma can only make 23 cents (US) per hour, while high school graduates can make up to $US1.15 per hour.

However, a significant proportion of the money they “earn” is withheld to pay court-imposed fines or financial restitution associated with their incarceration.

Despite the low rates of pay, federal prisoners are among the highest paid in the US system, with the national average wage of prison workers just 86 cents a day. In five states — Texas, Arkansas, Alabama, Georgia and Florida — prisoners must work without pay.

In 2017-18 ASPI took sponsorship money from the UAE. One of the world’s richest nations, the UAE has an appalling record in human trafficking and forced labour of domestic and construction workers, according to Human Rights Watch reports.

KBR (formerly Kellogg Brown & Root), a military focused engineering company, was among ASPI’s first declared sponsors. For at least five years it was a major financial backer of ASPI’s annual conference and in 2008 a human trafficking lawsuit was filed in the US against it in connection to its work for the US military during the Iraq War.

In 2004 a KBR subcontractor hired 13 Nepalese men to be kitchen workers in a Jordanian hotel but seized their passports and shipped them off to work at a US military base in Iraq. Twelve of the men were later kidnapped and executed by Islamic extremists.

KBR appealed and won on a legal technicality – the US Circuit Court ruled that the human trafficking was principally conducted on foreign soil.

Throughout the time of its ASPI sponsorship KBR was also involved in an international bribery scheme. Its chairman and CEO Albert “Jack” Stanley oversaw the payment of $US180 million in bribes to Nigerian officials to secure a $US6 billion contract in Nigeria. Stanley was sentenced to 2 ½ years prison in 2008.

At the time KBR was a division of giant US defence contractor Halliburton. Former US Vice President Dick Cheney served five years as Halliburton chairman and CEO.

The US Justice Department found the bribes were being paid throughout Cheney’s tenure although he was not directly implicated by US authorities. 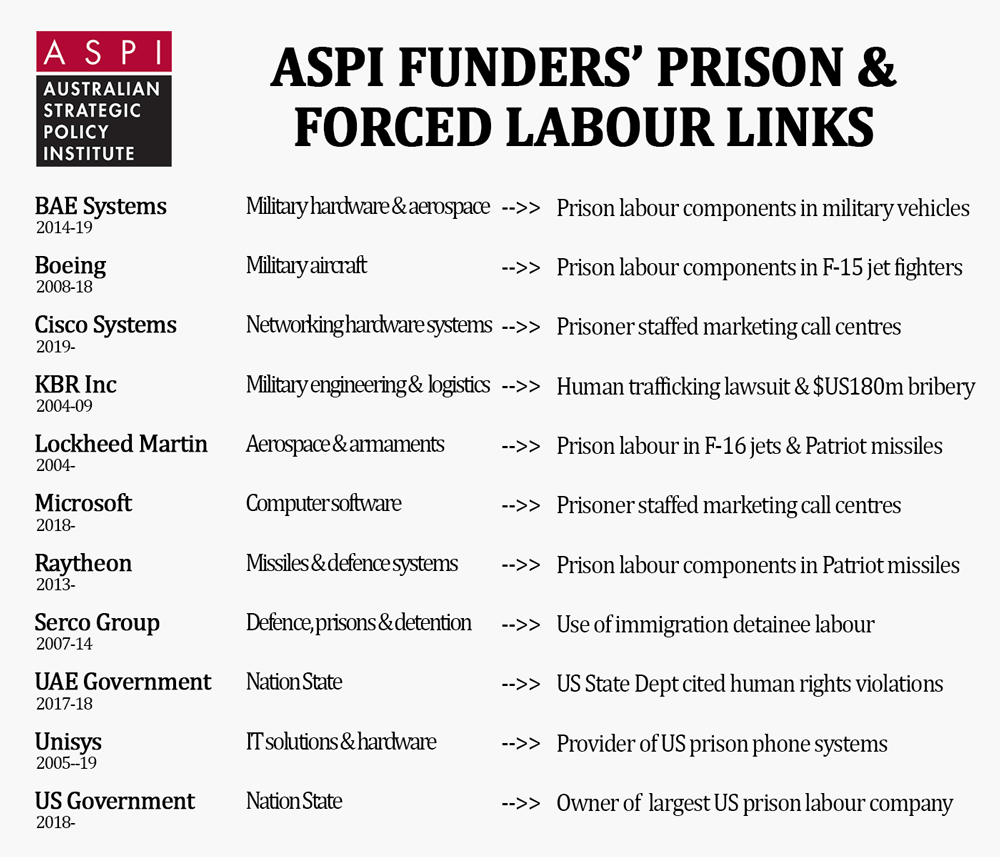 During the life of that sponsorship, an investigation revealed that Serco had replaced paid employees with detainees in two of its immigration detention centres in the UK. Those detainees were being paid as little as £1 per hour.

IT company Unisys, which provided ASPI with sponsorship money between 2005 and 2019, supplies phone systems to a number of US prisons. Such phone services are very profitable, with the average cost of a local phone call in US jails $US5.74 for 15 minutes, while in Arkansas the rate is $US24.82 per 15 minutes.

Two other ASPI sponsors, Cisco Systems and Microsoft, use prisoner-staffed marketing call centres operated by private company Televerde. The company pays female prisoners from Arizona and Indiana the minimum wage, of which two-thirds is withheld by the correctional institution.

This program is one of the nation’s most successful: one-quarter of Televerde prison employees remain with the company after their release: only 6% return to prison compared to the national average of 67%.

Editor’s Note: Using the same research methodology employed by ASPI in the production of its reports on the use of ‘forced labour’, information in this report was garnered from public sources including company websites and media reports. Information on commercial relationships between ASPI and governments and companies named in this article was taken from the ASPI website, ASPI Annual Reports and answers provided to an Australian Senate Estimates Committee.