It is with a deep sense of gratitude and humility that we pay homage to Rupert Murdoch’s News Ltd today and The Australian newspaper.
For yesterday, The Oz puffed a story about yours truly off its front page. A very nice picture it was too. Strangely, there was no “exclusive” tag on the story but it was terrific advertising nonetheless. The point of the story itself, “GetUp! cash behind ‘independent’ journalist” seems to be an effort to discredit yours truly as somehow in GetUp!’s pocket.
As per the clear disclaimers at the bottom of our tax coverage, GetUp! and the Tax Justice Network are funding michaelwest.com.au to investigate the financial statements of 20 multinational companies and their tax affairs. It is a one-off arrangement. There is no Faustian pact.
In any case, receiving a tutorial on journalistic ethics from the folks at News Limited is a bit like being accused of being a Nazi by Adolf Hitler. 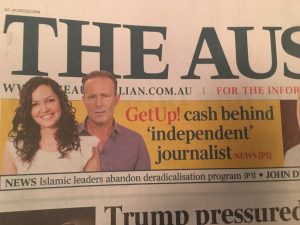 They don’t do things in half measures at Holt Street though and have sooled another reporter onto this incredible non-story story.
The Australian’s legal affairs editor, Chris Merritt, sent nine questions late yesterday (these are appended to the bottom of this article) asking about our commercial arrangements and so forth.
So it was that we sent Chris some questions about News Limited’s commercial arrangements and so forth. Here they are:
QUESTIONS FOR NEWS LIMITED
Hi Chris,
Appreciate the publicity thanks. My questions for you:
1. Did The Australian lose $50 million last year? If not, how big were the losses?
2. Please explain the financial arrangements between The Australian, News Ltd and the oil and gas industry.
3. Would you care to provide a statement explaining why you believe the independence of your journalism is not compromised by a). News Ltd’s advertisers and other commercial arrangements and, b). the stewardship of Rupert Murdoch?
4. Is News Ltd still regarded as the ATO’s number one corporate tax “risk” in Australia?
5. I assume from the tenor of your final question that you intend to question my integrity. Are you personally comfortable to be firing the bullets for a global media organisation (whose newspaper loses money) against a small business person who has taken significant personal risk and whose journalistic enterprise is 1). well regarded, 2). engaged in important public interest journalism and 3). profitable?

We are deeply appreciative of Chris’s questions as he prompted us to take a look at the financial statements for Rupert’s holding company News Australia Holdings.
According to ASIC records, Rupert Murdoch’s News Australia Holdings has two US shareholders: News Corporation and FHC Holdings, LLC. According to the financial statements however, News Australia Holdings has three “members” or shareholders.
Revenue last year was $3.1 billion, gross assets stood at $8.2 billion and employees 9,119.
After costs, including interest expense of $138 million – mostly to related News Corp entities – the company booked a profit of $156 million and tax expense of $54 million. Bottom line profit was $70 million.
Following criticism here of a $902 million loan of 15 years duration to Foxtel, the suspiciously high interest rate of 12 per cent has been “modified” in the latest set of accounts to 10.5 per cent. That is still high; compare the loan to News’ REA group which shows a weighted average interest rate of 3.2 per cent.

The point of the related party borrowings are that they enable News to wipe out $130 million in profit before tax is due. That money is presumably funnelled offshore to another News Corp entity.
News was criticised in 2013 when the company was awarded a tax rebate of $880 million after winning a case against the Australian Tax Office (ATO) in the Federal Court. The rebate sparked controversy as the ATO elected not to appeal the case at a time when the federal election campaign was in full swing, Murdoch’s newspapers were backing Tony Abbott for prime minister and Mr Abbott was ahead in the polls.
QUESTIONS FROM THE AUSTRALIAN’S LEGAL AFFAIRS EDITOR, CHRIS MERRITT
Michael,
I am preparing an article on your arrangement with GetUp and have a few questions:
# Could you please tell me what financial arrangements – or any other arrangements – you have made with GetUp?
# Specifically, could you please tell me how much GetUp is paying you to produce articles about tax avoidance by big companies?
# Could you please tell me whether GetUp has paid you for other articles or services?
# Could you please tell me when those payments were made and for what purpose?
# Was any financial arrangement – or any other type of arrangement – in place when GetUp quoted you extensively in a press release it issued on September 12 last year concerning opposition to any privatisation of ASIC’s registry?
# A total of 84 journalists signed the open letter that is referred to in that press release. Do you know why you were the only journalist whose remarks were used in the press release?
# Did you have any financial arrangement – or any other arrangement – in place with GetUp when, on September 9 last year, you posted a video to your website that urges viewers to sign GetUp’s petition against any privatisation of the ASIC registry
# Did GetUp make a financial arrangement – or any other arrangement – with you that concerns GetUp’s decision to publish a promotional video for you and your website on the GetUp website?
# Would you care to provide a statement explaining why the independence of your journalism has not been compromised by your links to GetUp?
Here is a detailed assessment of the track record of News paying tax in Australia as confirmed by the company’s response to questions on notice for the Senate Inquiry into Corporate Tax Avoidance:

Editor’s Note:
You can follow readers’ reaction on Twitter below by scrolling down the Tweets. Please join in!
Tweets about @MichaelWestBiz

Sixty one. That’s the additional number of days women currently have to work in a financial year to earn as much as their male counterparts. And when it comes to superannuation, the gender gap gets worse.

Verging on Ponzi: how the banks are rorting the RBA’s big bail-out fund

Banks are profiteering from the Reserve Bank's bail-out fund by betting on their own bonds. Michael West investigates a very quiet scandal that is the Committed Liquidity Facility.

Management expert Boston Consulting has managed to burn off millions in tax by paying large whacks to "consultants". Luke Stacey investigates how the US consultants have tried to trick the Tax Office.

Lendlease has finally admitted the Tax Office is conducting an audit on its $1 billion double dipping scam, while paying zero tax again in Australia.

The Biggest Robber: Crown caught and confessed as cagey Lendlease covers up