A mad pursuit and a “non-denial denial” prove the government of NSW has artificially lengthened the tollroads on Australia’s largest infrastructure project by way of a sneaky mathematical formula designed to lift tolls.

It was like posing the question: “Did you have Coco-Pops for breakfast?” and getting the answer, “No, I did not have Rice Bubbles for breakfast but scrambled eggs are beneficial”.

Only, in this case, the questions were put to two NSW ministers, one government-owned private corporation and the transport department – via a slew of emails, texts and phone calls – and took five days to get the answer.

QUESTION:
“This one for the Minister on “Equalisation”.
“We stumbled across a road pricing factor in the schedules to M5 concession deeds … (sched 44a M5). The effect of this is to increase tolls (the distance factor) by up to 36 per cent on Sydney roads …”

ANSWER:
“Motorists will pay the same toll for both the M5 East and New M5, despite a marginal difference in length to ensure both roads flow smoothly.
“Tolls for the entire WestConnex will be capped at a maximum amount ($8.95). This will benefit road users taking long trips who will not incur additional toll after 16 kilometres in a single trip.”

It was the quintessential government PR stunt. Full-dress obfuscation then a response which dodged the question by addressing a related proposition which had never been put in the first place.

Loitering out on the wing – the least likely culprit, indeed the last culprit, to get the ball – the Department of Roads and Maritime Services was finally forced to take the hospital pass after some deft footwork by the Treasurer, the Minister for WestConnex and the Sydney Motorway Corporation (SMC).

For those interested in the audio version of the story, it is here in an interview with James Valentine on ABC Radio yesterday.

As readers can see by looking at the schedules for the M5 tollroad in the following story, the “Equalisation Factor” which is next to the “Distance” on each sector of the road determines the toll, but the shorter distances often have bigger equalisation factors.

This means the government’s claim of “marginal difference in length” of road does not stack up. For instance, the Kingsgrove to Marsh Street section shows a distance of 4.98k and an Equalisation of $1.34 but the longer section from Kingsgrove to General Holmes Drive of 7.10k shows an EF of $1.24. 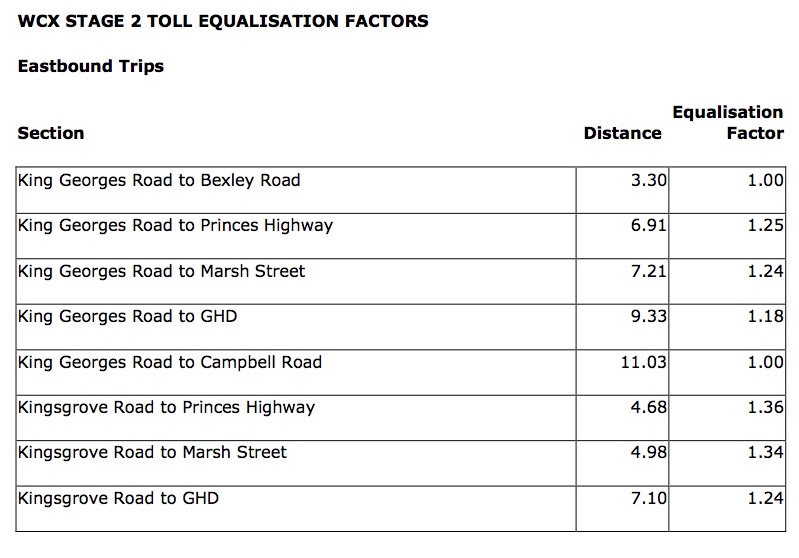 Ian Bell, the transport expert and actuary who discovered this artificial lengthening of the roads (the irony which is Equalisation) said it was difficult to interpret the government’s explanation as anything other than mumbo jumbo.

“The answer doesn’t make sense … it seems to assume that everyone using the M5 East wants to do a similar trip to that on the New M5, which is from St Peters to King Georges Rd (or vice versa), whereas the two motorways are effectively independent after the portals just to the east of King Georges Rd,” said Bell.

“… (It) gives no excuse for adding tolls onto travellers who want to go from General Holmes Drive to King Georges Road or vice versa, and go nowhere near St Peters.

“So, doesn’t that point to the M5 East as being like the M4 widened only worse (no $500 million outlaid on M5 East), namely just a toll regime being applied to a previously un-tolled motorway, not to raise funds to improve public transport such as rail … and take pressure off the congested road system; but rather to subsidise the WCX system which in future will be a subsidy to private owners.”

As for the RMS’s “capping” response, as toll-capping only applies for distances over 16.34 kms incurred in one trip, unbroken, along the WestConnex system, “That cannot physically include the M5 East,” said Bell, as it didn’t actually connect with the WestConnex network.

Equalisation is the latest chapter in the list of toll blow-outs. While a project of this size and ambition will surely have its hiccups, these are sizeable ones for motorists who will pay the tolls.

Meanwhile, the state spent $123 million on lawyers last year, of which $78 million went on transport work, according to the NSW Government Legal Services Panel annual report. The next billing cluster health, puny in comparison at just $8 million.

Top three players on this gravy train were Clayton Utz, Ashurst and Minters. The disclosure document doesn’t say what was spent in the prior year.

What the document did say was that its “Legal Services Panel will continue to focus on achieving value for money in the procurement of legal services and the utilisation of value added services.”

In light of these significant beneficiaries of WestConnex, it is therefore a vile and outlandish slur to claim that all Sydney motorists will suffer from the impending blow-out in tolls.

Those motorists who happen also to be lawyers on the government’s Legal Services Panel will be able to offset the cost of rising tolls with the $78 million they shared last year for providing transport advice.

Where are the US billionaires, the Wall Streeters, the Big Four tax firms Deloitte, EY, KPMG, PwC? Michael West explores the mystery of the Pandora Papers in this first of a two-part series.