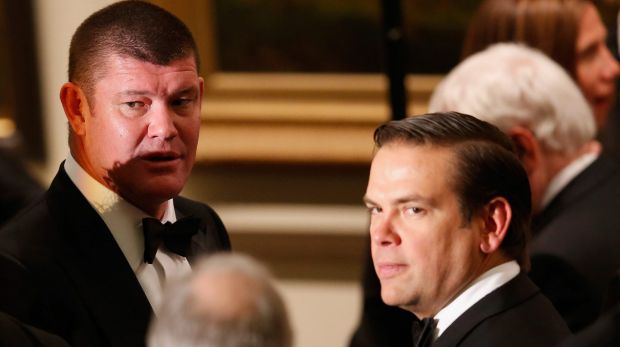 The Packers, Murdochs, Lowys, Lews, Foxs, Inghams, Hains and Myers and a host of other “old money” billionaires will be watching Parliament closely this week in the expectation the government will do the right thing by them and knock last week’s pesky Senate amendments on the head.

The controversial “Kidnap Amendment” is up for debate. This is an acid test for government in Australia. Will they serve the interests of a handful of wealthy families and their tax lawyers or the nation’s other 23.9 million people?

A second Senate amendment proposing that foreign multinationals file proper General Purpose financial statements has also been struck down by the Coalition and is also heading for debate. Again, will the government serve the interests of the world’s biggest companies and help them conceal their related party transactions or will it act in the public interest and support this basic transparency measure? There has been some misconception about the Kidnap Amendment. It does not pertain to billionaires such as Gina Rinehart and Andrew Forrest. It captures “old money”. Anybody willing to part with $38 can get a copy of Rinehart’s Hancock Prospecting accounts and see how much tax was paid last year.

Likewise, for free, you can find Andrew Forrest’s Fortescue Metals Group paid the Tax Office $US529 million last year. The company is listed on the ASX and a quick search will throw up its financial statements.

Yet thanks to the “grandfathering” provisions in the Corporations Act – a mates’ deal struck by government many years ago for the super rich – the old money billionaires have an exemption from publicly filing their companies’ financial statements.

The proposal, shoved through by the Greens and independents in the Senate, and supported by Labor, but shot down by the Treasurer, Scott Morrison, the next day, is that these large companies make public a couple of their key financial metrics: their revenues and how much tax they pay.

This is hardly too much to ask; and it would be a fine thing, although perhaps too vain hope, for a couple of billionaires to step up and go public themselves to volunteer the information in the interest of their fellow citizens.

Even without new legislation, much can be done to combat multinational tax avoidance. It is within the present powers of the corporate regulator to compel multinationals operating in this country to lodge General Purpose financial statements. The accounting standards already hold that if there are external “users” of a large company’s accounts (such as creditors and local communities) then that company should file General Purpose accounts.

Further, last week’s Senate inquiry into corporate tax avoidance threw up evidence which can be pursued to force multinationals to be more transparent. Uber, for instance, told the Senate it was a Dutch parent entity which ran its business in Australia.

A search of Uber’s filings show Uber Australia got an exemption from the Australian Securities & Investments Commission (ASIC) last October from filing accounts due to the fact that its directors deemed it to be a “Small Pty Company Controlled by a Foreign Company which is Not Part of a Large Group”. This beggars belief.

Uber’s ultimate parent and controller in the US has a market value of $50 billion. It is highly doubtful too whether Uber’s immediate parent, Uber International Holding BV, has less than 50 staff, $12.5 million in assets and $25 million in revenues – the threshold for being classed a “small company” (it has to satisfy two of the three).

Therefore it is doubtful whether Uber should be entitled to the small company relief order granted it by ASIC. ASIC extracts show Uber Australia was incorporated in 2012. It managed to file its 2013 financial statements 22 months late in August this year. The others are missing.

Yet in the mockery which constituted its evidence to the Senate, Uber, like the other multinationals called to appear, professed to be 100 per cent in favour of transparency and obeying the laws of the Commonwealth.

Likewise its auditors from PwC, like their Big Four peers, professed to be big fans of transparency and helping their clients to adhere to the laws. If so, has PwC, as it should, advised ASIC of the missing accounts or that a small company exemption may not be in order?

Words, it seems, are cheap. Is Uber’s “Principal Place of Business” in Australia really “care of PKF Lawler … Unit 8 1, O’Connell St, Sydney”, another bunch of accountants?

Facebook, another digital giant, also won “small company” relief from ASIC. Clearly, they think the laws down here are a joke.

It is already within the Corporations Act to levy large fines and ban directors if companies fail to comply with the financial reporting requirements. Instead of pinging two-bit local small businesses with fines, regulators would do well to enforcing the laws in respect of multinationals. It would be a good start.