Funded by the Department of Defence, the Australia Strategic Policy Institute collects millions more as it drives the “China threat” narrative. As Marcus Reubenstein reports, while ASPI is the media’s go-to experts for public comment, ASPI is remarkably coy about revealing all its funding sources.

Exactly one year ago today, it was awarded a similar “management advisory services” contract for the considerably larger amount of $614,536.

ASPI has pushed hard for boosts to defence spending, in particular an upgrade of Australia’s missile capabilities.

The Government says it will spend $800 million on the US-made AGM-158C Long Range Anti Ship Missile, manufactured by Lockheed Martin, which gave ASPI $135,909 in sponsorship funds in 2018-19.

The Australian Strategic Policy Institute is the “go to” think tank for the mainstream media seeking an “independent voice” to make sense of troubled times with China.

Its analysts are knowledgeable and articulate, always forthcoming with research pointing to the strategic threat of China.

However, it is less forthcoming about the funders of its research, although it is an open secret that foreign governments and multi-billion-dollar weapons makers are generous supporters.

What is not widely known is the extent to which taxpayers are propping it up, through dozens of small contracts not listed in its annual reports.

Last year, these contracts amounted to more than $2 million and were signed by the chiefs of a small group of government departments which, say ASPI’s critics, have vested interests in promoting China as Australia’s No. 1 strategic threat.

Two weeks ago, ASPI was again thrust into the international limelight after China’s foreign ministry directly named it as the source of claims by Prime Minister Scott Morrison that Australia was the victim of a sustained cyber security attack.

Morrison did not name China but, ASPI’s executive director, Peter Jennings did. He told journalists it was a “95%” likelihood that China was behind the alleged attacks.

Critics, including former foreign ministers, ambassadors and senior figures within the defence establishment, contend that ASPI is an anti-China lobby that has hoodwinked the media into believing it is independent.

Labor Senator Kim Carr, who is pursuing ASPI through a Senate committee, argues it’s a conflicted government-funded body that lacks transparency, particularly in the way it reports who funds its research.

“It is an Australian government organisation, a Commonwealth company, and they’ve been at the centre of Sinophobia. This is what happened in the Cold War, you set up a front and create a world view that’s unchallengeable. Then you de-legitimize anyone who argues for engagement with China. Ironically, engagement with China remains official government policy”.

The Howard Government set up ASPI in 2001 as an independent think tank that would challenge a supposed culture of stagnated thinking, weighed down by the defence bureaucracy.

Its main funding was an annual grant from the Defence Department but over the past decade it has developed more and more revenue streams — and no obligation to reveal exactly who pays it what.

Defence remains its biggest benefactor. Before the federal election, the Morrison Government not only increased this funding by more than 13%, it locked in a guaranteed $20 million until 2023.

This largesse does not include one-off payments for sponsorship and commissioned reports. In its annual reports, ASPI declares the $4 million annual Defence grant but opaquely refers to this as “core funding”.

According to Department of Finance figures, in 2018-19 it received an additional $1,363,002.84 in funding from Defence, which was not publicly declared.

According to answers it provided to a Senate Estimates committee in February, ASPI collected $1,158,581.63 (pre-GST) in funding from Defence without clearly declaring the source of those funds.

ASPI didn’t explain the discrepancy between its two reported figures.

In its annual report, ASPI splits income into two sources: “Defence funding” and “Sale of goods and rendering of services”. It also produced a gloomy graph showing how “core” funding had withered away from 100% of its income to a moderate 43%. However, the graph doesn’t take into account its numerous government tenders and contracts that have delivered a financial windfall. In the past five years the value of its government contracts has increased by more than 300%. Figures from the Department of Finance’s procurement website AusTender show ASPI was awarded $2,133,716.62 in contracts between July 2019 and June 2020. ASPI records all these government payments in its annual reports but muddies the waters by consolidating them with sponsorships and other commercial revenue.

ASPI has received 37 government contracts in the past two years. See below or click here for easier viewing. 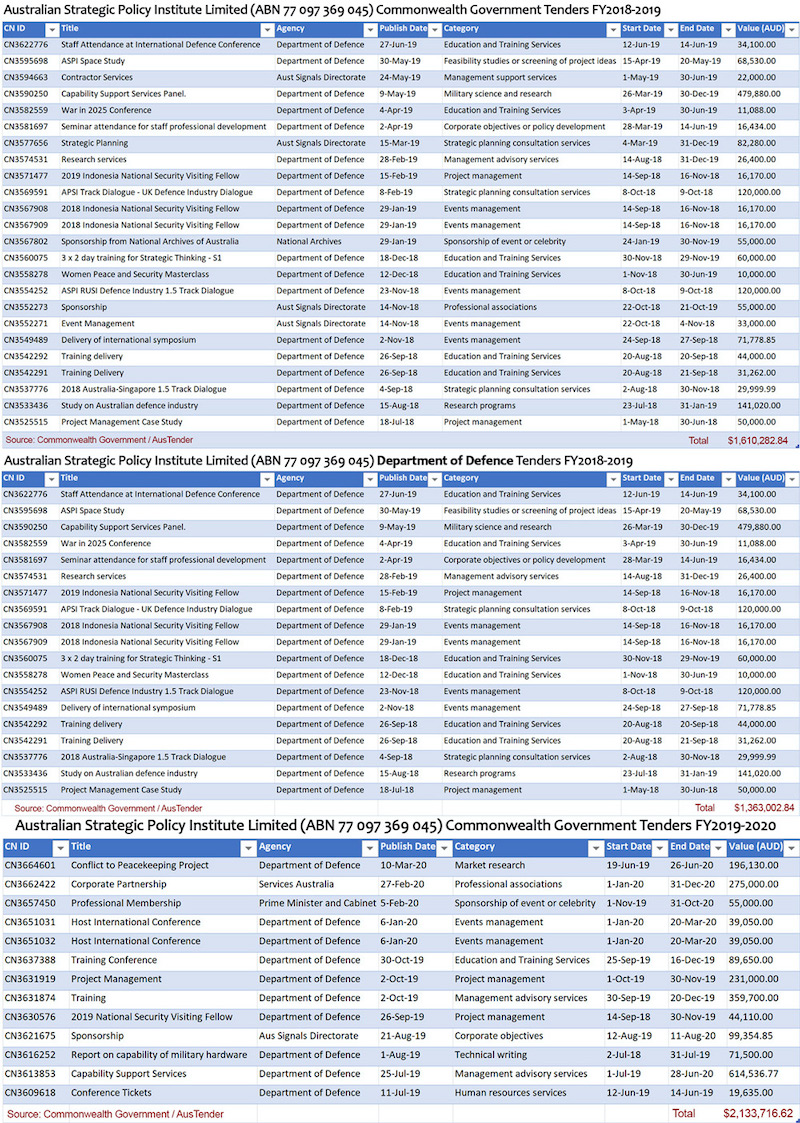 While $55,000 might be more likely the entertainment budget for a gala premiere, the sponsorship from the Department of PM&C was in fact a free talk attended by about 60 people at a Canberra hotel. Here’s ASPI’s Tweet of the reported Canberra launch:

Moving on to tonight’s Q&A with Margaret Staib, Chris Masters and @MAJGEN_Bottrell pic.twitter.com/ozlvDHLnCo

In February, Senator Kim Carr took ASPI to task over the reporting of its finances. A notable omission in its Annual Report is the source of an $88,964.37 payment that it lists from the Institute for War and Peace Reporting (Note: ASPI has no statutory obligation to report such payments). In this instance the source was the US government. Perhaps ironically, IWPR is a not-for-profit set up to promote free journalism and “advocate for government and institutional accountability”. As to why a London-headquartered not-for-profit founded in the former Yugoslavia was making substantial payments to ASPI on behalf of the US State Department there was no explanation.

ASPI later revealed the US State Department was due to pay ASPI a further US$140,000 in the 2019-20 financial year. That payment will be made by the US Embassy in Canberra on behalf of the State Department’s Global Engagement Center, which is headed up by Lea Gabrielle, a former Fox News reporter controversially appointed to her position by the Trump Administration in 2019.

In February Senator Carr told Parliament that ASPI had received $450,000 in US State Department funding. The institute denied it, saying in a statement the grant was for less than half the amount quoted.

This is a half-truth at best. The dollar amounts ASPI provided to the Senate were in both US and Australian currency.

For a statutory government body, required by legislation to report its earnings in Australian currency, it seems odd it would go before parliament and quote income specifically related to one project in multiple currencies.

ASPI has received funding from the governments of Britain, Japan and Taiwan as well as NATO. Among its corporate supporters are global weapons makers Thales, BAE Systems, Raytheon, SAAB, Northrop Grumman, MDBA Missile Systems and Naval Group. Yet their contribution of over $330,000 last year is dwarfed by that of a handful of government departments and agencies.

Disclosures to the Senate revealed that ASPI had at least 56 sources of income in 2018-19 which it categorised as either sponsorships or commissioned income.

Critics might accuse ASPI of having a narrow world view, but its views are financially supported by a very broad base of benefactors.

This is a special investigation by APAC News, Michael West Media and Pearls & Irritations