Health insurance is yet another sector subsidised by taxpayers but statutory disclosure remains poor, particularly when it comes to the new industry leader, Bupa. Although it is a $6 billion insurance leviathan and steward of Australia’s elderly, this company and its auditor KPMG claim there is only one legitimate user of its financial statements and that is its UK parent. Investigation:

The good news is that Bupa pays a fair bit of tax for a multinational company – some $96 million last year and $80 million the year before that. It is not, like many other multinationals, a shameless tax cheat. The bad news is that its reporting is deficient and Bupa quietly switched from relatively good disclosure a couple of years ago as many of its peers have done, no doubt egged on by the global accounting firms.

The top entity here is Bupa Australia Healthcare Holdings Limited, whose accounts are not consolidated and, despite reeling in $6.7 billion in income last year, Bupa’s head accounts display income of just $104,000. By not consolidating at the top of the group, Bupa can avoid having to display a true picture of its profitability.

Health insurance is yet another sector which is subsidised by taxpayers yet whose financial disclosures are murky to be point of deception. In the case of Bupa, there is a good argument they don’t comply with accounting standards. Yet Bupa and the other top health insurers have jacked up their premiums, often hitting their customers with double-digit increases, year after year. 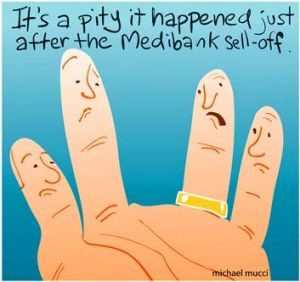 For the past seven years, like clockwork, premiums have risen on April 1. Since 2010, Bupa is up 43.7 per cent overall, NIB 49 per cent, HCF 46.6 per cent and Medibank 45.3 per cent. As the health insurance market is consolidating, that is the big players are regularly swallowing the smaller not-for-profits, the trajectory of insurance premiums would appear destined to rise further.

In an interesting aside, Bupa chairman is John Conde who is also
President of the Australian Government Remuneration Tribunal.

The Tribunal’s role is to determine and report on the remuneration of federal parliamentarians, judicial and non-judicial offices of the federal courts and senior bureaucrats.

Conde therefore has a significant role in determining the pay of those who regulate Bupa, for instance commissioners of the Australian Tax Office (ATO) and the corporate regulator, the Australian Securities & Investments Commission (ASIC).

It is ironic then that the accounts for Bupa’s top entity in Australia deliver no disclosures of how its own executives and directors are paid.

A Bupa spokesman said yesterday (full responses below this story) John Conde was acutely aware of conflicts of interest, “They are raised at the start of every board meeting”.

Further, Bupa, along with a slather of fellow multinationals operating in Australia, switched from filing “General Purpose” to “Special Purpose” financial reports three years ago. The latter reduce disclosure. They conceal vital information such as related party transactions with foreign associates.

Special Purpose accounts rely on a view of the accounting standards that the only stakeholder or “user” of such accounts are the “members” of the company, in this case the solitary shareholder of Bupa, a UK based entity, Bupa Investments Overseas Limited.

This UK vehicle counts among its myriad subsidiaries entities in the Channel Islands, Bermuda, Netherlands and St Kitts & Nevis in the Caribbean. The fine print to its accounts also reveal a swag of Australian entities as subsidiaries and this note:

“The company disposed of Stg1.16 billion B and C capital in BUPA Holdings Limited Partnership, a partnership registered in Australia, to Bupa ANZ Group Pty Ltd”. Partnership structures are notoriously impenetrable. They are also deployed by the third force in Australian supermarkets, Aldi, and by the Big Four accounting firms KPMG, Deloitte, PwC and EY.

According to the ATO’s corporate tax transparency list of Australia’s top 1904 companies, Bupa recorded revenue of $6.7 billion in 2016, a taxable profit of $334 million and paid tax of $96 million.

Numbers for the previous year were $6 billion revenue, $284 million taxable profit and $80 million tax. On the tax as proportion of taxable profit, Bupa is paying more than 28 per cent, close to the 30 per cent corporate tax rate.

However, in the absence of decent financial statements it is hard to tell how much “debt-loading” and expenses-loading the company does.

Tax paid is 1.5 per cent of revenue (1.3 per cent previously) and taxable profit as a proportion of revenue is around five per cent, which looks too skinny given the spiral in premiums. In any case, the measley $104,000 revealed as Bupa’s revenue last year is presented as finance income, not income from selling health insurance or running nursing homes, which is the core business.

This is akin to saying the principal activities of this column are being Michael West rather than journalism.

KPMG as auditor, according to the latest report, was paid $8,000 last year. KPMG partners don’t get out of bed in the morning for that.

· The ATO is required to produce an annual ‘Report of entity tax information’. On 9 December 2016, the ATO published the report for 2014–15, which included certain tax-related information for Australian public and foreign owned entities with total income of $100 million or more and Australian private companies with total income of $200 million or more. The following information was published in respect of the Bupa income tax consolidated group for the year ended 31 December 2014 (and hence the reference to Bupa Australia Healthcare Holdings Pty Limited (BAHH) having “filings to the ATO transparency list show more than $6B).

· The difference between the revenue of $104k in BAHH’s statutory accounts and the more than $6B shown in the ‘Report of entity tax information’ released by the ATO is a function of stand-alone statutory accounts of BAHH and different accounting vs tax concepts of consolidation. Refer below for further details.

Prior to the year ended 31 December 2014, consolidated financial statements were lodged with ASIC for Bupa Australia Healthcare Holdings Pty Ltd (now called Bupa ANZ Healthcare Holdings Pty Ltd, “BAHH”). For the year ended 31 December 2014, Bupa determined that separate (i.e. standalone) financial statements are more appropriate for BAHH. This was on the basis that:

(Note the financial results of the fourth business unit within Bupa ANZ, Health Insurance, are represented by the consolidated financial statements of Bupa HI Holdings Pty Ltd (“BHIH”), which are also lodged with ASIC.)

· This approach was confirmed as acceptable and signed off accordingly by our external auditors, KPMG Australia.

The three entities at the top of the Market Unit that prepare “separate accounts” are as follows:

MW: Is it appropriate for the chairman John Conde to be on the government’s remuneration tribunal which sets remuneration for ASIC/ATO etc? Is there a conflict?

Bupa: In Mr Conde’s leadership of the Bupa board and all of his other business interests, he is acutely aware of conflicts of interest. They are raised at the start of every Bupa board meeting.

“We understand that the Remuneration Tribunal Act details specific ‘Disclosure of interest by Tribunal members’ provisions and allows for a Tribunal member to exclude themselves from decision making where such an interest exists.

“When it comes to bodies like the ATO or ASIC almost every member of the Australian community and directors of companies would be subject to Australian tax law and corporations law.”

MW: I note there is no disclosure about BUPA remuneration of directors or executives. Is this a conflict? Is it appropriate?

The remuneration of all key management personnel within Bupa ANZ is disclosed in aggregate in each of the consolidated financial statements representing the operating business units within Bupa ANZ: BAHPL (note 27(a)), BHS (note 23) and BHIH (note 24).

This month, michaelwest.com.au is conducting an analysis of the tax affairs of 20 top multinational companies operating in Australia. The series is sponsored by GetUp and Tax Justice Network.

Former prime minister Paul Keating's speech last week on Australia-China relations has generated wide debate. Last Saturday his views were critiqued by Peter Hartcher in The Sydney Morning Herald and The Age. His reply to that article was rejected by those newspapers. This is an edited version of the rejected article.