Peering at the local accounts of Rupert Murdoch’s News Corp and Goldman Sachs … is the government’s claim to have sorted multinational tax avoidance correct? As they gaze down from their glass eyries, partners of the Big Four accounting firms must be chuckling.

The government took out newspaper ads earlier this month boasting of unequivocal victory in the fight against multinational tax avoidance. 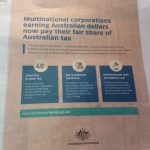 Government ad in The Age

It is no small irony that taxpayers have forked out for this bald-faced lie. “Multinational corporations earning Australian dollars now pay their fair share of Australian tax,” decreed the ad.

Hardly. Fair share suggests a social licence to operate. It suggests they pay something like the huge chunk of tax from their income which ordinary Australians pay. While it is true that the Australian Tax Office (ATO) and the federal government have reaped more income tax from multinationals this year than they had earlier anticipated, this is a fight which has only just begun. I has not been won.

Were it not for increasing community awareness of multinational tax avoidance – the world’s biggest rort – and rising concern over tax fairness, things would be worse. So the positive perspective is that, yes, inroads are being made via the diverted profits tax, the ATO’s tax avoidance task-force and the Multinational Anti-Avoidance Law (MAAL) which was enacted late in 2015.

As the swathe of December year financial reports have flowed through this month and last, it is evident that some companies such as Google and Facebook have been paying more tax, albeit slightly more and still well-short of reasonable amounts.

Others, such as oil giants Exxon, Shell and Chevron, digital players Booking.com, Airbnb, Expedia and eBay, and assorted others such as American Express are up to their same old tricks. We are presently analysing Big Pharma, a sector which is swimming in taxpayer subsidies thanks to the Pharmaceutical Benefits Scheme (PBS) – and then has another bite of the taxpayer cherry via transfer pricing shenanigans as well.

To a couple of serial multinational offenders, Goldman Sachs and News Corporation. The 2016 financial statements for “Goldies”, as the Giant Vampire Squid is affectionately known in financial markets, are utterly inadequate.

For a start, they are not even consolidated so don’t provide a true picture of the profitability of Wall Street’s famous, or infamous as many would put it, investment bank. Its head entity in Australia, Goldman Sachs Holdings ANZ Pty Ltd, discloses revenues of just $US24 million, the same as the prior year and well shy of the $US45 million booked in finance costs. Then the profit and loss statement shows an income tax “benefit”, yes benefit, of $US2.4 million, compared with last year’s benefit of $US18.5 million. There was a bottom line loss in both years.

On this, it would appear that Goldman has paid zero tax in the past three years in Australia. Although, travelling along to the cashf-flow statement, they disclose $US286 million was paid in tax last year (down from tax-received of $US8.5 million). When you get to the notes to the accounts though it shows an income tax benefit of $US2.4 million.

All of this is meaningless of course. As the accounts are not consolidated so don’t disclose what has been going on in the whole group. Further, tax may have been paid in Hong Kong, the domicile of the immediate parent, or elsewhere.

The usual feature of high finance charges and large related party loans are there, not to mention “service fee expenses” with related parties. Merchant banks such as Goldman Sachs, being banks, get away with a lot on the tax front.

Our very own Macquarie Bank had a keen reputation for tax structuring until it got pinged by authorities three years ago. In 2008 it even recorded a tax rate of 1.7 per cent after a jumbo ”tax arb” transaction, a currency swap so successful that it delivered a profit of $850 million in Asia and a matching loss in Australia.

So a billion dollar profit bore almost no tax.

At least Macquarie pays homage to financial accounting standards and doesn’t file a piteable and arguably non-compliant set of accounts like Goldman. ASIC could issue an edict tomorrow if it had the courage and a burst of energy, decreeing that any multinational company operating in Australia had to file proper “General Purpose” accounts.

This brings us to the entity formerly identified as the nation’s number one “tax risk”, Rupert Murdoch’s News Corporation. That mantle has probably gone to Chevron now. After being rapped over the knuckles by the Senate Inquiry into Corporate Tax Avoidance two years ago, News has begun to pay more tax: $110 million last year.

The main ruse was to create $7 billion in “goodwill” in 2004 via a string of related party transactions and then to rip out $4.5 billion in profits to the US.

News is still deploying this “repatriation of capital” subterfuge to this day.

This practice may be legal but it is unethical. The creation of “internally generated goodwill” could be described as suspect in the least. “A magic pudding” was the way former University of NSW accounting academic, Jeffrey Knapp, labelled it.

Over the ten years to 2015, Rupert Murdoch’s companies paid income tax equivalent to a rate of 4.8 per cent on $6.8 billion in operating cash flows, or just 10 per cent of operating profits.

They are still aggressively debt loading however, or giving themselves loans from overseas so they can rip out interest before paying tax. The critical numbers are $2.6 billion in related party borrowings on which they paid $130 million to themselves in related party interest charges offshore. Overall, debt jumped from $2.4B to $4.3B

A $411 million loan to Foxtel, which News owns with Telstra, remains. The interest rate on this loan is 10.5 per cent, more than double what the average wage earner pays on a mortgage. This is another ruse to avoid tax.

All in all, a better effort from News but the evidence on multinational tax avoiders is in. There is an improvement but a very long way to go.

This month GetUp and the Tax Justice Network have sponsored michaelwest.com.au to undertake a series of investigations into multinational tax avoidance.