In 2012, Australia became the first country in the world to introduce plain packaging for cigarettes — a move that aimed to “kill the glamour”, make smoking less appealing to all ages, limit misleading packaging, and provide more obvious health warnings. Australia’s plain packaging law was a hard-fought win.
In 2011-2012, two tobacco companies challenged plain packaging in the High Court of Australia where they unsuccessfully argued the Australian Government was trying to acquire their intellectual property, including trademarks, without proper compensation.

Australia has also had to defend its introduction of plain packaging several times on the world stage over accusations from other countries that the new rules infringed international trade.
But we have held firm and shown that intellectual property, public health and international trade can all co-exist.
Australia’s groundbreaking plain packaging of tobacco products has proven to be an effective means of tackling the global tobacco epidemic, alongside other tobacco control measures.
A number of other nations such as New Zealand, Ireland, France, the United Kingdom, and Canada have followed Australia’s lead.
There is a need to encourage further nations to follow suit — particularly in South East Asia, where the tobacco industry has been targeting its marketing resources. Our close neighbour Indonesia has one of world’s highest smoking rates, with two-thirds of adult males still smoking and children of any age legally able to buy and smoke cigarettes.
We need to tackle the heartbreaking tragedy of the tobacco epidemic on a global level.
Plain packaging removes logos, colours, brand images and promotional information from cigarette packages, with all cigarettes in Australia now contained in a standard colour pack with a standard font, and a large, graphic health warning.
The QUT Faculty of Law has released a special issue of the QUT Law Review on the Plain Packaging of Tobacco Products, which includes case studies by guest writers on Australia, New Zealand, the United Kingdom, Ireland and Canada. 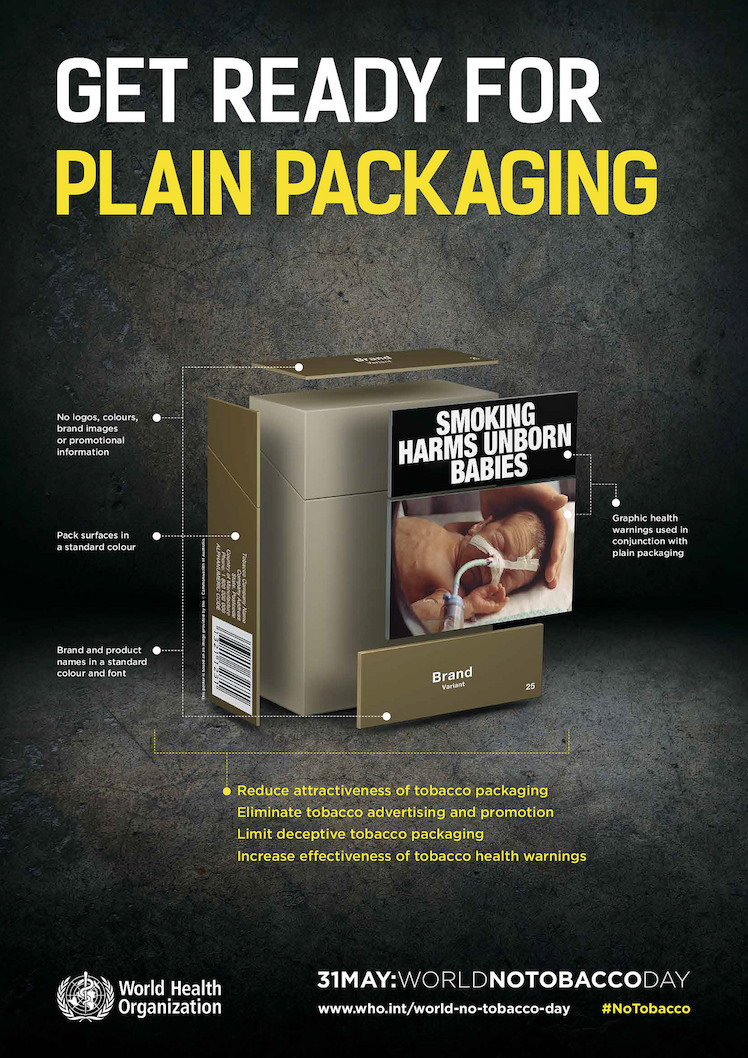 Are alcohol and food next?

In the QUT Law Review, QUT’s Dr Hope Johnson has also outlined lessons for other health campaigners regarding tobacco companies’ fight against plain packaging and the issue of ‘investor-state dispute settlement’ (ISDS).
“The strategies adopted by tobacco companies to prevent or delay regulation often parallel those adopted by the alcohol and food industries,” she writes.
“Tobacco use, unhealthy diets and alcohol abuse are three of the four main modifiable behaviours that increase the risk of non-communicable diseases, such as cancer, diabetes and cardiovascular diseases.
“… In the case of food, a state (country) may be more likely to avoid liability under ISDS if it introduces consumption-control measures for particular substances with well-established negative health impacts (eg transfats) and specific products (eg sugar-sweetened beverages), rather than applying  control measures like restriction on marketing across a range of products, such as unhealthy food.”

This year’s World No Tobacco Day ran the theme “Tobacco Breaks Hearts” and focussed on the impact tobacco has on the cardiovascular health of people worldwide.
QUT became a smoke-free university on July 1, 2016, with smoking banned across all campuses and QUT-controlled sites.

Matthew Rimmer is Professor of Intellectual Property Law and Innovation Law at Queensland University of Technology.
You can follow Matthew on Twitter at @DrRimmer.

Has PM put Australia on the hook to finance struggling UK, US submarine projects?

The powerful Pharmacy Guild of Australia, despite its members' record profits, and admitting Covid-19 did not harm their business one bit, has pocketed JobKeeper.

That Fella Down Under! Scott Morrison’s AUKUS deal designed to win election, not make Australia safe

Strap in for a media blitz on the threat from China. Prime Minister #ThatFellaDownUnder Scott Morrison and his merry band are about to take a war to the election. Michael West reports.

In its recent ruling the High Court decreed that commercial publishers have responsibility for comments made on their Facebook pages. In the absence of a 21st century legal framework covering this newfangled thing called the Internet, the Court's reasoning for the ruling refers in part to case-law dating back to the 19th century.