For dark pools, just wade into the ASX 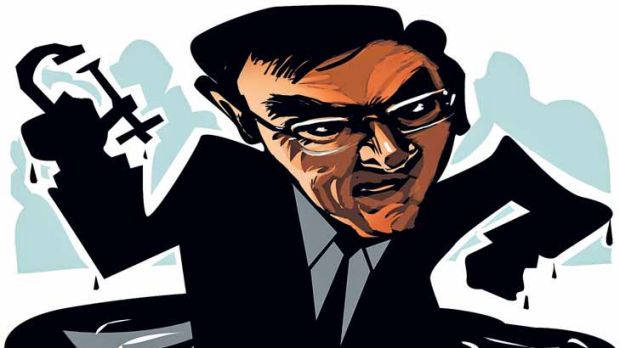 ONE distinct disadvantage of longevity in journalism is the persistent exposure to that annoying phenomenon called the ”crackdown”.

Like cicadas on a summer evening, you rarely get to see an actual crackdown with the naked eye – or witness a real ”tough new regime” for that matter – but you certainly hear a lot of them.

The latest crackdown to be crafted from the PR realm is a crackdown on ”dark pools” and high-frequency trading.

Swashbuckling Financial Services Minister Bill Shorten sallied forth a few days ago with another probe: ”An initial round of measures to put the clamps on dark pools.”

Hard on the heels of the Shorten probe, the doyen of crackdowns himself, corporate regulator Greg Medcraft, declared that a taskforce had been established to execute the crackdown.

This dark-pools crackdown was akin to sending one’s taskforce into war when the war is over and the mutilated bodies are being stretchered off the battlefield.

The biggest dark pool of the lot is lingering right under their noses, and that is the dark pool commonly known as the Australian Securities Exchange. At the behest of a handful of big broking houses, the ASX introduced a broker ID blackout in 2005. Until then, every share transaction had a broker ID number beside it. There has been zero transparency ever since.

To borrow from the immortal words of Eric Olthwaite, this is a dark pool so black that even the white bits are black.

Colossal arbitrages between futures, options and sharemarkets, ”front-running”, market manipulation – it is open slather for the big boys now.

Rivalry from the smaller brokers, their demise sped up by the digital revolution and the financial crisis, has faded. Retail punters and most ASX companies are the losers. Many punters fled for the CFD ”market” or the FX ”brokers”, only to be finally and comprehensively ransacked.

For those who haven’t had the pleasure of an acquaintance with this great demon, Dark Pools, it simply means trading things in a market that other people can’t see.

The irony is that the institutional players who sometimes inhabit these demon pools outside the purview of the ASX have done so precisely to avoid having their transactions tampered with by the high-frequency traders in the ASX dark pool.

Deploying fancy software to trade by the millisecond, the incursion of these high-frequency types has snipped a bit of value from everybody.

When the ASX snuck in its broker blackout seven years ago, replete with the requisite ”independent” report, which inevitably cheered it home, there was this: ”Preliminary evidence suggests that an anonymous environment may not be optimal for less active non-ASX/S&P200 stocks”.

This admission, sadly, was buried beneath the impenetrable ”univariate analysis” of ”heteroscedasticity” and the likes. The consultant, SIRCA, had earned its dough. No one read the thing. The black-out remained in the trial phase until the one journalist and two brokers whingeing about it moved on.

If the market were properly opened up for competition – clearing and settlement – the public could decide whether to opt for darkness or transparency.

IN MOST things, more transparency is better than less.

In markets, this reporter can only think of one case where this precept may be challenged, and that is in executive pay.

Here we were just last week, foolishly extolling the efficacy of the ”two-strikes” regime and the new temperance in remuneration this year when, kaboom, Mike Smith just planted a bomb and made off like the Road Runner.

Thanks to the ANZ board, their chief executive was paid a cool $19.1 million last year. The spin is that the ”real” number is more like $10 million and the rest was due to deferred stock, which just happened to vest during the period. But Smittie was still paid a ludicrous $14.75 million last year – so things remain ”on trend”.

Meanwhile, the QR National meeting came and went this week as chairman John Prescott rationalised the board’s decision to ratchet up bonuses on the grounds of some changes to accounting treatments. Last year, they rewrote the rules and blamed the floods.

This year’s official line was that accounting changes enhanced shareholder value. The last company we can recall using that tactic was Babcock & Brown.

One scallywag tweeted from the meeting about Prescott, ”Too old, too slow”, but we disagree. We in the media are desperately missing Babcock & Brown and welcome this engineering of innovative pay solutions, never canvassed in the QR prospectus.

Bring it on, we say! Let us pine for the Babcock epoch no more.

And the Queensland government, having claimed it would not vote its stake for exotic initiatives, did vote its stake. So it’s ”yes” to bigger cheques for fat cats and ”yes” to public health cuts and frozen disability allowances.