Olympic Dam's new tailings dam will cover an area of nearly three square kilometres of tailings waste up to a height of 30 metres at the centre, the height of a nine-storey building. BHP will leave this toxic mine waste there forever. Picture: Jessie Boylan

While a federal inquiry is under way into the Juukan Gorge disaster, BHP’s operations at its Olympic Dam mine are also coming under scrutiny. BHP is planning a 50% expansion in the operation of the mine, one of the world’s most significant deposits of copper, gold, silver and uranium.

A 1982 Indenture Act governs the Olympic Dam mine site. This legislation overrides the Aboriginal Heritage Act, the South Australian Mining Act, the Freedom of Information legislation and other public interest state laws – until 2036.

For example, any changes to BHP’s regime governing Aboriginal Heritage across the 12,000 square kilometre “Stuart Shelf Area” around the mine requires “the consent” of the company.

Civil society has repeatedly called for the repeal of the Indenture and for BHP to surrender its legal privileges. However, the Big Australian has failed to do so.

Now Indigenous cultural, social and spiritual values are in a fight for survival that centres around the unique and fragile Mound Springs of the Great Artesian Basin.

BHP takes ground water free of charge from the artesian basin for its Olympic Dam operations, courtesy of the 1982 Indenture Act. Last year as part of its planned expansion, BHP applied for the right to extract 50 million litres of water a day from the basin for a 25-year period. Yet the Basin Springs are already listed as an “Endangered Ecological Community”.

The Kokatha people are traditional owners and Native Title holders of the region encompassing the Olympic Dam mine. Other traditional owners are also affected, including the Arabana people, with the planned extraction of underground water from Arabana land. 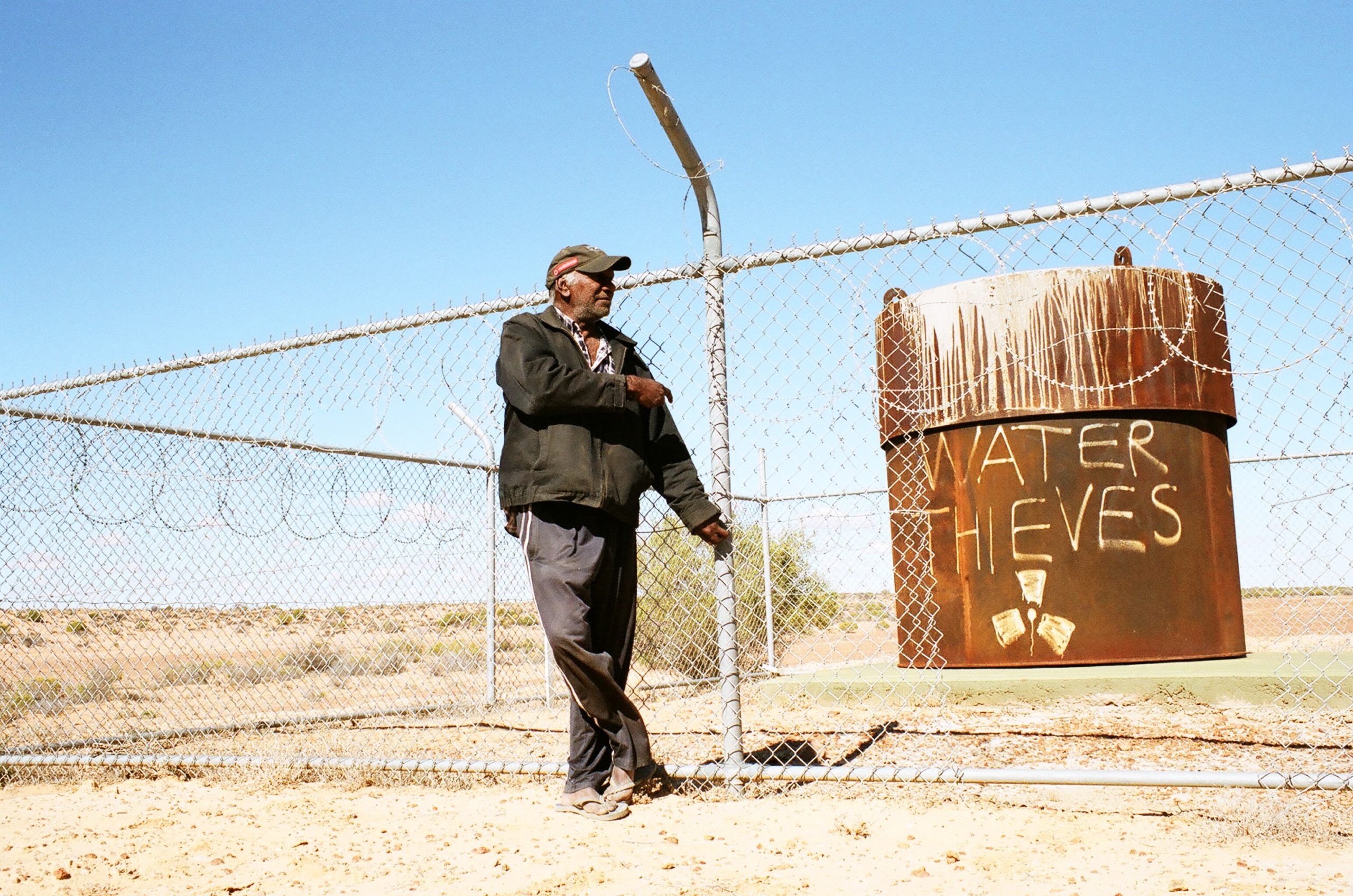 Arabana Elder Kevin Buzzacott at a station piping water from the Great Artesian Basin to the Olympic Dam mine. Photo: Jim Green

The announcement in June by Prime Minister Scott Morrison to fast track approvals and hand over to the states the national interest environmental approval power over resource and mining projects will be a disaster for the environment and cultural heritage.

As the Prime Minister stated: “We are determined to get out of the way … Ultimately, our objective is the streamlining of Commonwealth and state processes to a point of ‘single touch approvals.”

As part of the fast tracking, the Prime Minister announced a joint federal and state Taskforce to prioritise and “accelerate” approvals to BHP at Olympic Dam.

A key feature of the mine’s expansion is a massive new tailings dam, called Tailings Storage Facilities 6. TSF6 will cover an area of nearly three square kilometres of tailings waste up to a height of 30 metres at the centre of the tailings pile, equivalent to the height of a nine-storey building. BHP will leave this toxic waste there forever.

Radioactive tailings waste pose a significant long-term risk to the environment and must be isolated for more than 10,000 years ‒ effectively forever.

Meanwhile, the amount of hazardous tailings waste at Olympic Dam continues to increase and now amounts to an estimated 180 million tonnes, increasing at about 8‒10 million tonnes each year. Leaks in the ‘tailings retention system’ at Olympic Dam, photographed by a worker in 2009. BHP responded by threatening “disciplinary action” against any worker caught taking photos of the mine site.

Australia has to decide if corporate vested interests or national environmental and cultural significance should be determining factors in BHP’s Olympic Dam mine expansion. The Artesian Basin, which is already at significant risk, must be protected as a national asset and recognised as a “Matter of National Environmental Significance” under Federal environmental protection laws. And there are feasible alternatives regarding water extraction. BHP should have to pay for an alternative water supply for Olympic Dam – such as desalinated water.

But how can BHP be trusted to keep the environment safe, given the fact that it is putting at risk the safety of its employees, a fact pointed out to the company in an internal report?

The design for the tailings dam is a low-cost ‘upstream’ design, which a June 2020 report “Safety First: Guidelines for Responsible Mine Tailings Management”  by Mining Watch Canada and Earthworks USA recommended banning on safety grounds.

In response to the Samarco disaster, BHP conducted a safety review of all its tailings dams across the world. The internal “TSF Dam Break Study Report” by consultants GHD in August 2016 warned of the “extreme” consequence rating of all existing and proposed tailings dam waste storage facilities at the Olympic Dam mine.

The Dam Break Study Report concluded that more than 100 Olympic Dam workers were at risk of losing their lives in a catastrophic tailings dams embankment breach, “primarily as a result of the potential flow of tailings into the adjacent backfill quarry and entrance to the underground mine”, and that such a breach would cause “irrecoverable” environmental damage.

Yet the company kept these warnings secret for three years. The first public disclosure of this information was not made until after BHP was granted in 2019 federal and state approvals to construct and operate the TSF6 tailings dam.

Moreover, Federal Environment Minister Sussan Ley granted approval for TSF6 without a comprehensive safety impact assessment and without setting any conditions on BHP to protect workers and the environment.

The Samarco mining disaster, Brazil’s worst environmental disaster, caused the loss of 19 lives and catastrophic environmental impacts with permanent pollution of native people’s land and rivers. Brazilian prosecutors say the company failed to take actions that could have prevented the disaster. The Guardian has reported that six months before the Samarco disaster, the company operating the mine predicted the potential impact of such a disaster in a worst-case risk assessment.

BHP now faces a US$6.3 billion law-suit in the UK on behalf of 200,000 Brazilian people. The case alleges BHP was “woefully negligent” in the run-up to the dam failure.

In response, the BHP Tailings Facilities Disclosure reported that Olympic Dam has three of the four ‘extreme’ consequence tailings dams in Australia, but failed to reveal that this crucial fact had been reported to BHP in August 2016 but had been kept from the public.

BHP also conducted an Environmental, Social, and Governance Briefing on tailings dams in Sydney in June 2019. This report states that the “principal potential impact” in a “most significant failure mode” is in “employee impacts” – with the potential loss of life of 100 BHP employees at Olympic Dam.

However, the global BHP Tailings Facilities Disclosure and the ESG Briefing report failed to disclose that BHP was at that very time pushing ahead with approval of another risky upstream design extreme consequence tailings dam ‒ TSF6 at Olympic Dam.

Dr Jim Green is the national nuclear campaigner with Friends of the Earth Australia and editor of the Nuclear Monitor newsletter. Click here for further information on BHP’s Olympic Dam mine.