According to the chair of the Coalition’s backbench energy committee, Craig Kelly, the RET’s penalty for committing grievous bodily harm to mining profits should be death by firing squad rather than its current slow death by hanging. Getting rid of the RET, so the logic goes, will provide more subsidies to the fossil fuel industry. Philip Soos investigates how this rent-seeking industry has captured the Coalition Government to loot the pockets of taxpayers. The irony is that by axing fossil fuel subsidies, we’d need never spend another brass razoo on renewables.

AUSTRALIA’S CLIMATE change culture war is a hideous spectacle. Despite the obvious reality of human-caused climate change and the urgent need to act, the powerful fossil fuels industry (FFI) has captured the Coalition Government to wring the last dollar of profit from their soon-to-be stranded assets.

The Coalition has proudly undone policies designed to mitigate climate change, notably in scrapping the carbon pricing scheme and reducing the federal Renewables Energy Target (RET). Australia is the only country in the world to introduce a highly effective emissions reduction scheme and then scuttle it.  These government actions were driven by willful ignorance, lavish campaign contributions and the persistent revolving door between government and industry delivering financial reward and influence to those eager to act against the common good.

One conservative ideological obsession is the incessant complaining about subsidies to the renewable energy sector. Such support is provided by federal and state RET programs, about $2.5 billion annually for investment by the Clean Energy Finance Corporation (CEFC) and Australian Renewable Energy Agency (ARENA), and various initiatives by state governments.

Yet the same ideologues who stridently oppose renewable energy subsidies remain silent or actively rent-seek for more support to the FFI. Research demonstrates that FFI subsidies tower over those received by renewables.

Revolving Doors: how the fossil fuel lobby has governments ensnared

Externalities are a cost or benefit imposed upon third parties who were not party to the transaction that generated the cost or benefit. The FFI generates negative externalities in pollution costs though few see how pervasive these are.

There have been numerous studies published, typically in developed nations, attempting to estimate just how widespread the costs have become.

The following lists some of the research:

There is no time series available demonstrating the ongoing negative externalities arising from the consumption of gas and black and brown coal in the generation of electricity nationwide, so I’ve developed a general estimate. This report calculates that greenhouse and health care costs amount to $52/MWh for brown coal, $42/MWh for black coal and $19/MWh for gas in Australia. In 2017, these costs amounted to $8.2bn for electricity generation alone.

This estimate likely understates the true cost, especially for gas, given numerous other issues not considered. These consist of groundwater pollution, permanent changes in groundwater pressures, risks of desertification of large inland areas within a couple of decades, fugitive emissions and, worst of all, the toxic by-product of contaminated salt. 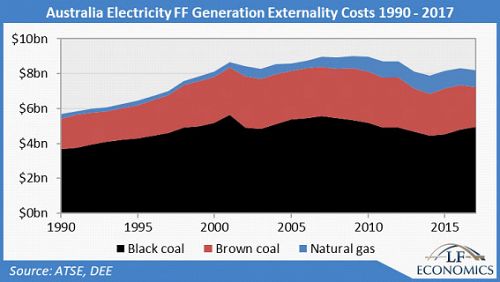 Australia’s tax concessions (tax expenditures) for the FFI are enormous, estimated at $11bn for 2018, sourced from Federal Government budget papers. This does not include state-based royalty holidays. As the IMF argued correctly, tax concessions compromise fairness, tend to be inefficient and poorly targeted and are vulnerable to industry lobbying.

Given Australia offers the largest tax concessions relative to GDP in the OECD and the FFI already benefits enormously from polluting without limit, no argument can be mounted to support them. Further, the nation has lost around $90bn in rent resource taxes from the oil and gas industries.

There are numerous other supports provided to the FFI. These mainly involve federal and state government assistance via infrastructure, capital investment and research support. The Export Finance and Insurance Corporation (EFIC) also aids the expansion of the FFI.

Not well known is the condition for licencing new coal mines, including expansions, is that such mines are obliged by government to provide their output to coal-fired generators at prices far below export rates. Otherwise, generators would have to purchase coal at current export rates, sharply increasing costs and rendering the plants unprofitable.

Although the FFI have made stupendous profits, corporate owners have often refused to or only partially funded the cost of rehabilitating abandoned and exhausted coal mines, leaving extensive damage to the surrounding environment (another negative externality). Just filling the holes and craters from mining is estimated at a conservative $18bn. Taxpayers will have to foot the bill for rehabilitation or tolerate toxic sites and landscape scars of staggering size.

To date, there has been insufficient research to know the full extent of these miscellaneous subsidies, though they no doubt amount to many billions of dollars annually.

CSG lobbyists: untangling the web of the influence peddlars

One of the greatest deceptions imposed upon us is the pretence that taxes are levied only by government. As I’ve explained elsewhere, capitalist markets impose their own form of taxation and hence wealth and income redistribution.

These market-imposed taxes should be called private taxes, for obvious reasons. Clearly, negative externalities are a form of private tax, as people unwillingly bear these costs which benefit those who own and control the FFI.

Unlike public taxes which are measured to the dollar for as far back as the 18th century and are subject to endless research and commentary, private taxes like external costs are simply ignored. This suits polluters and free-riders just fine.

While the framework of mainstream neoclassical economics is technically capable of understanding and calculating private taxation, the real problem arises in recognising the sheer extent of the problem.

In the early 1970s, U.S. economist E.K. Hunt challenged the reigning orthodoxy by explaining that the general assumption of efficient markets is unlikely to hold given the presence of catastrophic deluges of externalities. Hunt argued that the profit motive provided every incentive to externalise costs, which meant capitalist economies would be suffocated by externalities. Here, he accurately inverts the famous maxim of Adam Smith:

Every individual necessarily labours to render the annual external costs of the society as great as he can. He generally, indeed, neither intends to promote the public misery nor knows how much he is promoting it. He intends only his own gain and he is in this, as in many other cases, led by an invisible foot to promote an end which was no part of his intention. Nor is it any better for society that it was no part of it. By pursuing his own interest he frequently promotes social misery more effectually than when he really intends to promote it.

His analysis was further refined by U.S. economists Michael Albert and Robin Hahnel in their book Quiet Revolution In Welfare Economics. They argue that ‘in postfeudal history, a plausible case can be made that no economic failure has contributed more to the waste of productive resources than misallocations of markets uncorrected for external effects.’

Their research may sound like an exaggeration if not for climate change, which, given its adverse effects, is arguably the largest private tax in history (the privatisation of land rent is a potential contender). Poisoning of the oceans, resource depletion and widespread banking and financial risks are other major uncorrected externalities.

The evidence demonstrates millions of lives and billions of livelihoods are imperilled by climate change, stemming from the inefficiencies and rational insanity of capitalist markets and the FFI. No other economic system in history has threatened the planet with global environmental ecocide. Pollution kills 9 million people annually, which every 11 years equals the highest estimate for the numbers who died under communism.

Cost externalisation is a policy favoured by the corporate elite to internalise the benefits while externalising costs onto others. The political oligarchy ensures the public has limited to non-existent political representation to defend themselves against the onslaught of private taxation.

Conservative forces such as the Coalition and IPA claim to support lower taxes — a form of deliberate deception. Their agenda is to reduce public taxes to make room for private taxes, which explains their visceral attacks on the carbon pricing scheme. Extensive redistribution and taxation are considered perfectly acceptable when the corporate sector engages in it, legally stealing with impunity.

In addition to making super-profits by levying enormous private taxes, the highly-concentrated oligopolistic FFI pays little or no corporate income tax, as revealed by investigative journalist Michael West. This is achieved through financial engineering using trusts, tax-free havens, loopholes and a severe lack of transparency.

Not to be outdone, the Coalition wants to subsidise the construction of new coal power plants and indemnify these plants against future carbon-related liabilities. The Government has suggested policies that pervert decent ACCC recommendations to benefit some of the most powerful FFI corporations.

There is no need for a single cent of support for renewables if the subsidies to the FFI are removed. Electricity prices from coal and gas generation would rapidly become prohibitively expensive if the total social costs imposed were fully reflected in market prices.

Pricing externalities into oil derivatives like petrol, diesel and kerosene would also cause internal-combustion vehicle usage costs to skyrocket. We would see a staggering investment shift into renewables (far greater than what is currently occurring) and the FFI exposed as an economic fraud.

The evidence shows the FFI would not exist if not for its ability to loot via cost externalisation. FFI profits are therefore maintained by levying enormous widespread private taxes upon the public, the environment and future generations.

The FFI has done untold damage while incessantly rent-seeking and lying to maintain illegitimate privileges. No other industry threatens our welfare as does the FFI, which perfectly illustrates the rational insanity promoted by unfettered capitalist markets.

Despite the hold the FFI has upon a bankrupt and authoritarian system of political oligarchy, the FFI is destined to die a much-deserved death. Research by Stanford academic Tony Seba and futurist Ramez Naam demonstrates that solar PV, wind, battery storage and autonomous electric vehicles are exponential, disruptive technologies that will transform economies rapidly during the 2020s to be almost entirely renewable by 2030.

———————
This article was originally published on Independent Australia.

The NSW government is pushing through new coal exploration areas in the state’s mid-west, which have been labelled unviable and “corrupt” by independent experts even as the G7 call a halt on all new coal mining reports Callum Foote

As a block, the two major parties voted to give our money, public money, to corporations to drill for coal seam gas in the Northern Territory, to open up a gigantic new territory, the Beetaloo Basin, for fracking.

The Andrews Government has pledged the end of native logging in Victoria by 2030. Yet it is allowing Allied Natural Wood Enterprises (ANWE) to acquire more mills and become a near monopoly, potentially profiteering on what should be an industry on its way to extinction. Conservation campaigner Harriett Swift reports.

As petrochemical giants plan to double new plastics production and the bulk of Australian plastics are tipped into landfill, not recycled, Luke Stacey checks out how other countries are tackling the plastics crisis versus the Coalition Government’s 2025 National Packaging Targets and waste export bans.

Duxton Water executives have been boasting about “beautiful” structural imbalances in Australia’s water market, and potentially dazzling profits from drought. Corporate nut farming is thirsty business and the proliferation of almond farms is poised to whip up prices and crush traditional agriculture in Australia's food bowl, reports Callum Foote.