Virgin Australia and shadowy partner HNA Group have abandoned plans for their mega flight training school for Chinese pilots in Tamworth. In the latest bizarre twist in the saga, Anthony Klan reports a businessman working with the consortium faces up to 13 years’ jail over a string of serious criminal offences. ​

Michael Foxman, who operates a number of businesses in Australia and overseas, has been ordered by a court to leave Tamworth, after being charged with seven offences over eight months, including multiple counts of threatening, or attempting to influence, witnesses.

It was revealed here last year that Virgin Australia and secretive Chinese conglomerate HNA Group had somehow got permission to build a giant training school for Chinese pilots at the Australian Defence Force (ADF) airbase in Tamworth. Foxman is associated with that deal. His charges are unrelated but are the latest bizarre twist in the bizarre flight school project.

Foxman, 49, has a wide and diverse range of business interests.

He is the chief executive of a US-based investment company called RiskWise Group; is the part owner and director of Macau Resources Group, a company registered in the tax haven of the British Virgin Islands but which operates “VIP gaming rooms” in a string of casinos in China’s Macau; he is “head of visa and investment placement” at an Australian immigration company; the founder of an entity called the Tamworth Regional Economic Development Corporation; and he is the owner and licensee of Tamworth nightclub and pub the Imperial Brew House. In June last year, Foxman was charged over allegedly “allowing indecency” at the venue located on Marius St Tamworth and also known as the Imperial Hotel.

Since then, the businessman has faced numerous other charges for allegedly attempting to silence witnesses in regards to the original alleged offences.

In July, he was charged with intimidating two men “with the intention of causing physical or mental harm” and last month he was arrested again and charged with two counts of attempting to influence two more witnesses.

Together the charges carry a jail term of up to 13 years.

Foxman, who is due to face trial in the coming weeks, has said he will fight all the charges.

In a recent hearing, Magistrate Peter Thompson said there was a “very strong case” against Foxman and ordered him to leave Tamworth, granting him bail on the provision he go and live with family members in Sydney’s Bondi.

Magistrate Thompson said the evidence suggested Foxman was “someone who has a level of power…over people in the community”, The Northern Daily Leader reported.

Alongside operating “VIP gaming rooms” in Macau casinos, Foxman is heavily involved in immigration in Australia as the “head of visa and immigration investment placement” at  Commonwealth Capital Partners, also known as CCP, according to the company’s website.

The specialties of the company, which states it has offices in Melbourne and Hong Kong, include “student visas”, “citizenship by investment” and “residency by investment”.

“It is CCP’s strength in Government Relationships spanning from the bottom of South East Asia and stretching to China,” the site says.

In March last year, on then CEO John Borghetti’s last day on the job, it was revealed Virgin Australia was in secret negotiations with one of its major shareholders, HNA Group (owner of Hainan Airlines and other assets) to build a massive flight training school at Tamworth NSW at the site of what was the RAAF’s biggest pilot training academy. Despite security experts raising serious concerns about the proposal, and continuing murkiness around the deal – about which Virgin Australia has made a series of false claims – Treasurer Josh Frydenberg and the Foreign Investment Review Board signed off on the $30 million proposal in October last year.

The project has been rocky for the past 12 months but it was formally scrapped two weeks ago. The statement from Virgin Australia reads:

“The operating conditions within our industry have altered significantly as a result of the Australian bushfires and coronavirus. In response, the Virgin Australia Group is currently reducing capacity and removing aircraft from our fleet, which means we do not forecast any demand for new pilot cadets for the foreseeable future. Therefore Virgin Australia and our preferred training partner, AIAC, will be withdrawing from negotiations with Tamworth Regional Council with respect to establishing a flight training school in Tamworth.”

Since then Virgin Australia, which is over 91% foreign owned, has been granted tens of millions dollars in taxpayer-backed funds by way of a waived fees and charges, and the spotlight has fallen on the company with CEO Paul Scurrah now seeking more public funds.

Should Virgin Australia should receive taxpayer handouts? There is a case for intervention to maintain competition via the Qantas and Virgin duopoly. As Michael West Media this week revealed Borghetti and Scurrah have personally given at least 54 Coalition federal MPs free memberships, collectively worth hundreds of thousands of dollars via Virgin’s The Club — the airline’s “secret” network of exclusive, invitation-only airport lounges.

Foxman has repeatedly publicly said he represents HNA Group, including late last year when he responded to a newspaper article about the flight school proposal on social media by saying that Tamworth council “best bring me to the table,” adding, “after all it’s my client that owns Virgin”.

Both Virgin Australia and HNA Group declined to comment when asked whether Foxman’s claims to work for them were correct. 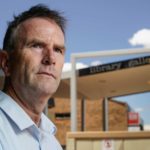 Tamworth Regional Council councillor Mark Rodda said Foxman had told him personally that he represented Virgin Australia and HNA Group in the proposed Tamworth flight school, although he had not been provided with any concrete evidence to support this.

“He did make the suggestion to me the project was because of him,” Rodda told Michael West Media.

Virgin Australia was to develop the Tamworth flight school in joint venture with Port Macquarie-based flight school operator the Australian International Aviation College, which is controlled and majority owned by HNA Group.

As well as in Port Macquarie, AIAC operates a small pilot training facility at Kempsey Airport, also on the NSW mid-north coast, which it plans to redevelop into a major $18m flight school.

Both Kempsey Shire Council mayor Liz Campbell and Tamworth mayor Col Murray have faced criticism from residents concerned about trips they have taken to China.

On one trip, in November 2018, Campbell and other Kempsey council members met with HNA Group senior executives, while Murray and council representatives of Tamworth council have taken seven trips to China since late 2010, including a “seven day study tour” in May last year.

In response to a series of written questions, Tamworth council general manager Paul Bennett said the council had not had dealings with Foxman.

Rodda, however, said proponents of the Tamworth project, who he understood represented HNA Group, and who he said spoke limited English, had visited Tamworth council and had met with councillors regarding the proposal.