And they beat us in the PBS too It’s a good thing for baby boomers that young people have been locked out of the property market. If Gen X and Gen Y were allowed to fritter away their earnings on mortgage repayments, selfishly amassing their own wealth, they would have less money to subsidise pharmaceuticals for the baby boomers when they really need it … as healthcare costs blow out in the coming years.

The Pharmaceutical Benefits Scheme (PBS), once a reasonably efficient beast which cost taxpayers $6.5 billion a year, is likely to surpass $11 billion this year. Most of it goes to Big Pharma, but just how much is hard to tell.

Transparency, from both government and industry, is poor. So it is that Australian taxpayers are held ransom by the power of the pharma lobby, its large political party donations, and the timidity of government to negotiate hard on behalf of its citizens.

With the Bledisloe Cup season almost upon us, it will not cheer Australian rugby supporters to hear that the Kiwis are trouncing us on the pharmaceutical benefits paddock too. Yes, we pay three times as much as they do  in New Zealand.

The cost of Australia’s most expensive drug was finally revealed over the weekend – not by government, and not by a drug company, but by an infectious diseases expert at an AIDS conference in Paris.

Professor Margaret Hellard of the Burnet Institute showed the listed price of Harvoni, the hepatitis C “blockbuster” drug, at US$5,799. The total taxpayer subsidy works out at $A59,079 for a standard 12-week treatment. 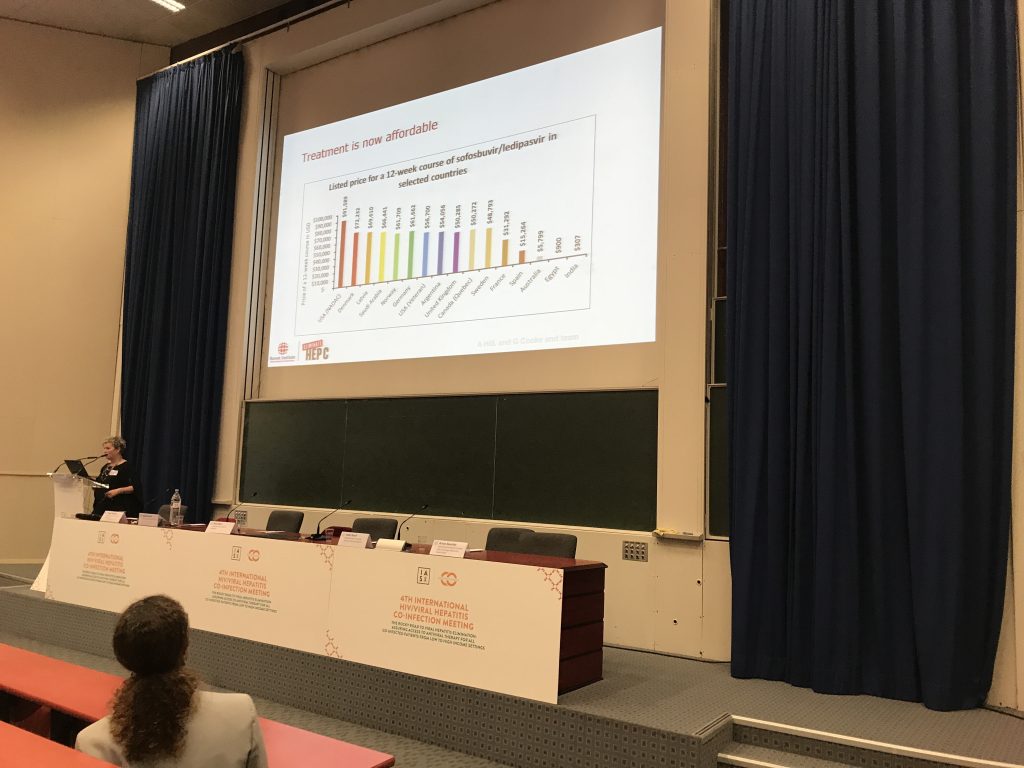 Looking at Hellard’s chart, the listed price for a 12-week course of Harvoni (branded sofosbuvir/ledipasvir) is US$91,589 in the US and US$900 in Egypt (where hep C infections run at 10 per cent). Australia is the third-most affordable on the chart – after Egypt and India – but in South America prices remain at more than US$50,000.

Access to this critical cure for hep C is simply unattainable in many poor countries where people are dying daily of the disease.

From an Australian perspective, the immediate public policy issues are price, transparency and accountability. As a rich nation, Australia can still fund blockbuster drugs publicly, but growth in the PBS is unsustainable in the longer term and Big Pharma – heavily subsidised on one front and heavily avoiding tax on the other – is “gaming” government.

The standard industry defence is that the costs of research and development are high. However, a study this month found the 18 drug companies listed on the S&P 500 Index in the US spend more money buying back their own shares on Wall Street and paying dividends than they spend on R&D.

Gilead Sciences is a major culprit, splashing US$27 billion on buybacks and US$17 billion on research. Buybacks are a capital management initiative that manipulates a share price higher and therefore executive bonuses too. They do nothing for taxpayers and little for people dying of a disease who can’t afford the cure.

The Gilead and the taxpayer Odyssey

Citing a share market research firm, The New York Times reports that some US$390 billion in share buybacks have been announced this year, US$13 billion more than at the same time in 2016.

Meanwhile, in Australia, the same Big Pharma companies operate effectively in the dark. A study by michaelwest.com.au found most file Special Purpose financial reports, which allow them to conceal related party transactions with their associates offshore.

As regulators and the Australian Accounting Standards Board dither on closing financial reporting loopholes, many of these multinationals have switched from the more meaningful General Purpose reports to Special Purpose reporting – all with the trademark connivance of the Big Four global accounting firms.

In the case of Gilead’s hep C cure, it is a sorry state of affairs that basic information about a drug that is so critical to public health and so costly for taxpayers could be withheld for so long from medical professionals and patients.

The financial reporting needs fixing too. The companies fail to properly disclose how much money they make from government. They even fail basic reporting standards.

With enough patience it is possible to find information in the PBS on particular companies and how much they make, but the information is often old and does not drill down clearly to the particular PBS item.

Novartis tops the most recently available list, costing government almost A$800 million for its 3.5 million prescriptions sold. The figures that really stand out though are “government cost per script” of $21,572.75 per script for Gilead Sciences and $1,740.04 per Abbvie script.

According to Dr James Freeman, who started up a “buyers’ club” to help patients access the hep C cure at far lower prices from Asia, some 34,200 patients were treated in the first year out of about 250,000 infected: “So we only managed 14 per cent.”

“In the context of a real capped price deal, I would have expected that the government would have spent $20 million to $50 million on a TV advertising blitz to maximise uptake,” said Freeman. “We see this for depression, asthma, haemochromatosis. We have not seen it for HCV drugs.”

This column, co-published by The Conversation with michaelwest.com.au, is part of the Democracy Futures series, a joint global initiative between The Conversation and the Sydney Democracy Network. The project aims to stimulate fresh thinking about the many challenges facing democracies in the 21st century.

michaelwest.com.au has been sponsored by GetUp! and the Tax Justice Network to analyse the tax affairs of 20 leading multinational companies which operate in Australia.