ScoMo tells the truth about real estate, gets the sin bin On Monday, Treasurer Scott Morrison told the truth. On Friday he was gone, gone as the government’s chief spokesman for the economy that is, replaced by Malcolm Turnbull.

It may have been coincidence, it may have been merely another faux pas in what has hardly been an illustrious track record as treasurer. In any case, the truth would not have endeared ScoMo to his Coalition peers. The Treasurer carelessly veered from the party line, letting slip that lowering taxes would push property prices higher, not lower.

Lowering taxes is an article of faith for the government but Scott Morrison told 2GB Radio that Victoria’s plan to drop stamp duty for first home buyers would drive up house prices:

“On the issue of stamp duty, I welcome it but at the end of the day if that just means that people just bid up more at the auction because they can borrow more because they don’t have to pay stamp duty, obviously that will just take prices in one direction.”

Rubbing salt into the wounds of his Coalition colleagues, ScoMo then mouthed off with the truth again! The $7,000 first home buyers’ grant, an initiative of the Howard government, had the same effect, he said.

Hadn’t anybody told the man we have now entered the Post-Truth epoch?

Morrison was on a roll, an honesty roll, even before then. Over the weekend, he had failed to rule out a paring-back of the 50 per cent capital gains tax concession. 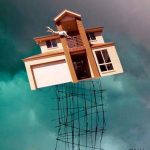 All this free thinking jars with the party line that the only problem with the property market is supply, not demand.

Only yesterday came a another reminder of how serious is the threat from Australia’s skewed property market settings.

The January housing finance commitments data showed the rate of lending to investors to buy property is once again running at 20 per cent. Loans to owner-occupiers continued to fall during the month of January while loans to investors spiked 4.2 per cent.

These are precisely the sort of figures which put the frighteners on the Reserve Bank and prudential regulator APRA which is tasked with ensuring the banking system doesn’t strap on too much risk.

There are a number of things which can be done to extract some of this risk from the market and to make it more equitable. One is to dump negative gearing on existing properties. Negative gearing involves a transfer of wealth from taxpayers to investors. It encourages speculators. It pushes up prices. It keeps young homebuyers out of the market.

The other thing – and we have hammered on fruitlessly about it here – is introducing the money laundering laws (AMF-CTF legislation) which were supposed to have been introduced almost a decade ago.

The wall of Chinese money whipping up a frenzy in sections of the metro realestate markets is partly black money. Chinese citizens are only permitted to take $US50,000 out of China. If the Anti-Money Laundering legislation were to be introduced, real estate agents, lawyers and accountants would be required to report the source of the billions which flow out of China into Australia each year.

This is a no-brainer for reform. Yet successive governments have found successive excuses for not acting on AML.

Just like the home-owners’ cash grant, eliminating stamp duty is a fine way to damage the state budget while slotting more money into the pockets of vendors; and therefore transfer taxpayers’ money to the property sector. Buyers can borrow more, they can bid up the price.

Reducing CGT is the opposite. Investors, knowing they will pay less CGT upon sale, can afford to pay more. So they bid up the price.

“Post-truth” may be a term synonymous with the presidency of Donald Trump and Trump is indeed a staggering liar. Yet politics has been post-truth for a long time as evinced by this government’s ludicrous claim that tampering with negative gearing would lead to disaster.

Quoting Peter Dutton, apparently without irony, himself a significant property investor and now touted as a future party leader:

“I think the economy will come to a shuddering halt and I think the stock market will crash”.

Right now, while very little is being lent for new homes, some $12 billion a month is lent by the banks to buy established homes.

One of the ideas in this deluge of policy ideas is a “bond aggregator proposal” to finance housing for those who can’t afford it, and therefore create an Affordable Housing Finance Corporation.

This is worth considering but there are some more obvious things to do to avert what must surely be a looming crisis, not of home ownership – we have that already – but of a banking system and an economy so precariously leveraged to overpriced residential property.